Walter O’Malley writes a letter to Capt. Emil Praeger, who was consulting engineer of the White House renovation in 1949, regarding grass for the turf at new Holman Stadium at Dodgertown in Vero Beach, Florida. Praeger, with significant input from O’Malley, designed Holman Stadium which would open on March 11, 1953. “I understand the White House lawn was planted with Merion blue grass and ‘Meyer Zoysia,’” said O’Malley. “The latter is an Oriental grass and the combinations from all indications is the ideal solution for Vero Beach. You know who did the landscaping and where we could buy Merion blue and Meyer Zoysia. I understand it is available in only limited quantities, in which event we would try to get enough for the infield this year and we would plant the outfield with St. Augustine grass to be replaced next year with cuttings from the infield.” On the same date, O’Malley writes a letter to Dodger Director Bud Holman in Vero about the grass stating, “Be good enough to talk to your local agriculturist about the grass known as ‘Meyer Zoysia.’ This grass mixed with Merion blue has a great resistance to heat and disease and is the coming thing...One great advantage of this grass is that the runners travel underground and do not build up the heavy mat and overground runners that are dangerous to a player’s spikes.” Also, O’Malley writes a letter to Dr. Frank Grau at the U.S. Golf Association’s Green Section for input and suggestions regarding the grass. 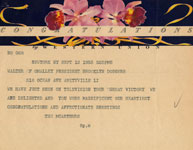 General Douglas MacArthur and his family send Walter O’Malley this congratulatory telegram, as the Dodgers (98-44) defeat the Milwaukee Braves, 5-2, to clinch the National League Pennant. “We have just seen on television your great victory. We are delighted and you were magnificent. Our heartiest congratulations and affectionate greetings.” For the Dodgers, it was their second consecutive National League Pennant.

In his letter to Otto K. Olesen, Postmaster of Los Angeles, Walter O’Malley discusses his grandfather Thomas O’Malley. “In the late 1880 he worked in the Brooklyn Post Office at a time when Brooklyn was a separate city and not part of the greater city of New York. His associate there was Albert Furman, who later became Postmaster of Brooklyn. Postmaster Furman was a respected and colorful figure in Brooklyn in those days. Many years ago when I was practicing law Postmaster Furman called at my office and told me of his long time association with my late Grandfather. He stated he (O’Malley) had been active in organizing an association of postal employees and that this effort was not appreciated at the time in Washington and that he was transferred from Brooklyn to San Francisco where he was assigned to the International Exposition in charge of the Post Office. He was never Postmaster of San Francisco but perhaps had that title at the International Exposition in San Francisco. One of my uncles was born in San Francisco during this period and my father attended grade school there as did his brothers and sisters. As I get the story, and after perhaps 4 years, he was reassigned to Brooklyn under Postmaster Furman, who had requested his transfer. He spent his entire adult life in the Postal Service and was devoted to it.”

In his letter to John D. Bellinger, President of First Hawaiian Bank in Honolulu, Walter O’Malley writes about his success at the World Series of Golf in Akron, Ohio. “I fully intend to go into great detail in telling you about this when we next meet but for the moment it will be sufficient to say that the winner of the World Series of Golf, the amateur class, was none other than — who do you suppose? The trophy is smiling at me right now and I would gladly bring it to Hawaii (for the Hawaiian Open) except for the excess baggage charge which would make it prohibitive. Please do not tell anybody else about this as I really would like to keep it a well guarded secret.”

The honeymooning couple of Mr. and Mrs. Brad Larsen of Logan, Utah are guests of Walter O’Malley, who provided tickets to them for the Dodgers-Braves game. Larsen had written a letter to O’Malley in which he stated that even though he was a dedicated fan of the Dodgers since he was six, he had yet to see a game in Dodger Stadium. In his return letter, O’Malley wrote, “Your check is returned as our Dodgers want to host you and your bride on your honeymoon. Two tickets are enclosed for the game of Sunday, September 12. Bring us luck as we wish you and your bride all the best.”

Walter O’Malley writes a response letter to Toru Shoriki, owner of the Yomiuri Giants in Tokyo, Japan. Shoriki had been approached by a representative of 20th Century Fox (Fox Sports) about starting an International World Series in 1979, with the winner of the World Series facing the Japan Series winner in a seven-game series. “This is to answer your letter of September 4, about a proposal for an International World Series. This is something your father (Matsutaro Shoriki, the founder of professional baseball in Japan) always wanted but the problems were almost insurmountable at this time. My suggestion is that you tell the representatives of 20th Century Fox that the matter is one that should be handled through Commissioner (Bowie) Kuhn’s office in conjunction with the Japanese Commissioner. It would be improper for your club to become involved as the subject involves all of the Japanese baseball teams and all of the U.S. teams because one never knows in advance who the ultimate winners will be. In any event radio and TV rights are involved. Finally, at this time it would be most difficult and impractical to give this suggestion any further thought. All the best.”