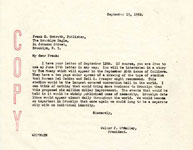 In a letter to Frank D. Schroth, Publisher, The Brooklyn Eagle, Walter O’Malley writes, “You will be interested in a story by Tom Meany which will appear in the September 26th issue of Collier’s. They have a two page color spread of a drawing of the type of stadium that Norman Bel Geddes and Emil H. Praeger might recommend. This stadium would be the largest covered convention hall in the world. I can think of nothing that would bring more business to Brooklyn than this proposed six million dollar improvement.”

A “Walter T. O’Malley” of Cambridge, Ohio writes a letter to Dodger President Walter F. O’Malley stating, “Once again I extend sincere congratulations on the pennant victory of your ball club. I had the pleasure of listening to the game over radio, when they defeated Milwaukee Braves last Saturday, clinching the National League pennant. There is just one request that I would like to make, and it is the same request that I included in my telegram last year, ‘BEAT THE YANKEES’.”

Walter O’Malley defends the performance of first-year Dodger Manager Walter Alston as the Dodgers were close to being eliminated from the National League pennant race. The Dodgers would finish second to the New York Giants, but O’Malley silenced the critics of Alston by saying, “I’m sure Alston didn’t hit Roy Campanella’s left hand with a hammer. I’m certain he didn’t inflame Johnny Podres’ appendix or take Don Newcombe under the stands and twist his shoulder. Alston didn’t abuse Carl Erskine, who has not pitched the way he was expected to, in any way.” Also, on this date, O’Malley delighted 1,169 fans at Ebbets Field when he and Gabe Paul, general manager of the Cincinnati Reds, announced that each of the fans would receive a ticket for the Dodgers-Reds game on September 16, the next day. Fans at Ebbets Field had sat in wet, 56-degree weather and both baseball men felt the fans should be rewarded for their loyalty.The Sporting News, September 22, 1954 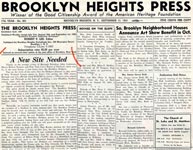 An editorial in the Brooklyn Heights Press discusses the need for a new stadium for the Brooklyn Dodgers. “One point should be clearly stated here. The Brooklyn Dodgers, headed by their President, Walter F. O’Malley, are not asking the borough or the city to build a new ball park. All the club is asking is that the site for a new ball park be made available. In marked contrast to the current major league trend, the Dodgers are offering to finance a $6,000,000 Stadium which ‘will be worthy of our ball club and our fine Dodger fans.’...The Brooklyn Stadium must be located close to subways, bus routes and railroads. No Brooklyn site answers all of (sp.) these requisites except the proposed Atlantic-Flatbush area. In such a setting the new Brooklyn Stadium would be an inviting place for not only the Brooklyn Dodgers games but also for college football, championship boxing bouts and other sports events...Ebbets Field was built in 1912. Nap Rucker pitched the first game there on April 9, 1913. It was, at that time, the last word in ball parks. But times have changed. The bus and automobile have replaced the trolley car which once transported fans by the thousands to Ebbets Field. The capacity of Ebbets Field (32,000) also is a throwback to the old days...It is, therefore, the earnest hope of this Newspaper that the Brooklyn Dodgers organization is successful in its quest for a new ball park site. What would Brooklyn be without our Dodgers?”Brooklyn Heights Press, editorial, September 15, 1955

Walter O’Malley endorses the late Ban Johnson’s idea of a West Point of baseball. “I can’t think of a better spot than Vero Beach, Florida,” said O’Malley. “But wherever it is, baseball has got to buy a university some place soon and start training some ballplayers.” When asked why, he stated, “It’s the only way we’ll ever get enough personnel for what the public wants — 10-team majors, or three or four major leagues.” Asked how the school should be set up, O’Malley said, “I would like to see a coordinated effort by all major league clubs on a really big-time scale — with a faculty headed by all the brains we can bring in, men such as Branch Rickey and George Sisler. I think that in time an academy so organized could be baseball’s main source of personnel.”Bob Oates, Los Angeles Times, September 15, 1958

The Dodgers become the first major league team to draw three million in home attendance, as they notch 3,011,368 to date for the season.

Walter O’Malley and his son — Dodger President Peter O’Malley — have a 10:30 a.m. appointment with Jerry Perenchio, prominent talent agent and producer. Perenchio would later be a sizeable owner of stock in Univision television studio plus his considerable holdings in Spanish-language radio.Answers.com website

Don Sutton throws a shutout over the Atlanta Braves, 5-0 as the Los Angeles Dodgers become the first team in Major League history to have more than 3,000,000 in attendance for regular season games in an 81-game home schedule.