Jack Lang of Lang News Company, Inc. in Long Island City, New York writes a letter to Walter O’Malley. “I was interested in reading the enclosed about the ‘quick thumb’ among your National League umpires as described in the series by Joe King of the World Telegram. I was particularly caught by your statement that while the umpiring is adequate mechanically, we need more frequent changes in umpires or interchanges from league to league, in order to get more human umpiring, and not just robot reactions. I take it you meant this as a statement in sympathy with King’s attitude that umpires to-day don’t give the players time to blow off steam, but are inclined to throw men out on the slightest provocation or sometimes for no reason at all...Umpires are mighty important to this game of ours, and much more time ought to be devoted to getting competent men, training them, developing them like players, and finally bringing them up. Competence should be measured not merely by ability to move about fast and make proper calls, but also on the ability to handle difficult situations without throwing players out by the wholesale.”

Walter O’Malley has some fun as he announces that Dodger Manager Walter Alston will return for another season at the Dodgers’ National League Pennant party. O’Malley holds an impromptu press conference and says, “There is little” then pauses to say, “There is no doubt about who will be managing the Dodgers next year.” O’Malley also went on to say, “This is only a step in the right direction. I hope that early next month we will have an even bigger party.”The Sporting News, September 28, 1955 Alston would go on to lead the Dodgers to the 1955 World Championship and be around for 21 more seasons including World Championships in 1959, 1963 and 1965. Earlier in the day, the Dodgers rode in limousines to Borough Hall in Brooklyn to celebrate their National League Pennant as a crowd of more than 300,000 joined in the festivities. 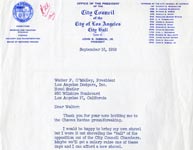 John S. Gibson, Jr., President of the Los Angeles City Council, writes a thank you note to Walter O’Malley for inviting him to groundbreaking ceremonies for Dodger Stadium. “I would be happy to bring my own shovel but I wore it out shoveling the ‘bull’ of the opposition out of the City Council Chambers. Maybe we’ll get a salary raise one of these days and I can afford a new shovel.” Gibson cast one of the 10 necessary votes approving the city’s contract with the Dodgers on October 7, 1957.

A crowd of 42,316 visit Dodger Stadium for a public rally with Republican Presidential candidate Barry Goldwater (Senator from Arizona). Goldwater was the Republican nominee in 1964 for the Presidency of the United States, but would be defeated by Lyndon B. Johnson.

Before an announced crowd of just 550 fans at Wrigley Field in Chicago, the Dodgers defeat the Chicago Cubs, 2-0 as Sandy Koufax pitches the final inning for the save after Claude Osteen pitched eight shutout innings. The victory starts the Dodgers on a 13-game winning streak and to win 15 of their last 16 games of the season to win the National League pennant. The Dodgers would go on to defeat the Minnesota Twins for the 1965 World Championship.

Walter O’Malley is the guest speaker at the University of Pennsylvania Law School Alumni Luncheon at the Century Plaza Hotel in Los Angeles.