Tom Villante, Sports Director of the agency Batten, Barton, Durstine & Osborn, Inc. of New York writes a letter to Walter O’Malley regarding the initial broadcasting contract for Jerry Doggett. “The contract is exactly the same as Al Helfer’s, except (1) the only firm commitment is for the balance of the 1956 season. Doggett’s compensation for this period is $1,000, plus air transportation to and from Dallas; (2) we have three yearly options covering the 1957, 1958 and 1959 seasons. These options are exercisable on or before December 31 of the previous year, which is the same option pick-up date we have on (Vin) Scully and Helfer. If this contract meets with your approval, I will then have Doggett sign it and return it to you for your signature.” Doggett signed on in 1956 and continued as the number two man in the booth, working alongside Scully for 32 seasons. 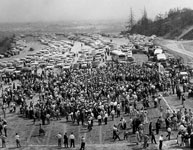 After numerous delays and legal challenges, a crowd of 5,000 attends groundbreaking ceremonies for Dodger Stadium, as Walter O’Malley; his son Peter; L.A. County Supervisor Kenneth Hahn and Hahn’s young son Jim (elected Mayor of L.A. in June 2001); L.A. City Councilman Gordon Hahn; Jack Yount of Vinnell Constructors; C. Don “Arch” Field, L.A. City Department of Public Works; Jack Vinnell of Vinnell Constructors; and Dodger Asst. to Executive Vice President and General Manager Dick Walsh are among the participants. O’Malley’s wife Kay is also present, along with Stadium designer Capt. Emil Praeger. Dodger players took their positions on a mocked up diamond, but were quickly swarmed by autograph seekers. At exactly 2:20 p.m., five bulldozers and five scrapers began the leveling and grading process. A small booklet featuring an architectural model of Dodger Stadium on the cover and a 1959 Dodger team photo on the inside welcomed all guests this way: “Commemorating the Ground-Breaking Ceremonies for the new Dodger Stadium at Chavez Ravine September 17, 1959...........AND YOU WERE THERE.”

Upon the suggestion of Chairman Warren M. Dorn, the Board of Supervisors for the County of Los Angeles adopt an order expressing its thanks to Walter O’Malley and the Dodger organization for televising the crucial three-game series (Sept. 16-18) from St. Louis. At the time, only road games from San Francisco were televised to Los Angeles on KTTV Channel 11. The Dodgers won all three games against the Cardinals and went on to capture the National League Pennant and, ultimately, the 1963 World Series Championship.

Dinner at 5:30 at the home of Gloria and actor Jimmy Stewart is noted in the appointment book of Walter O’Malley.

Walter O’Malley agrees to serve as a member of the Honorary Committee for the “Dinner of Champions” at the Hotel Astor in New York, honoring Mrs. Charles Shipman (Joan Whitney) Payson, who was the majority stockholder when she brought the expansion New York Mets to the city in 1962.

Sandy Koufax blanks the St. Louis Cardinals, 4-0 in Sportsman’s Park in St. Louis and sets a Major League record by most shutouts by a left hand pitcher with his 11th whitewash.

Ben Worrell is a guest of Walter O’Malley on “Sea Cadets Night” at Dodger Stadium. Worrell is known as “Father of the Seabees,” the civil engineering branch of the United States Navy. The Seabees have a long and proud history of dedicated service in engineering and construction for U.S. military projects.

Fernando Valenzuela shutouts the Atlanta Braves, 2-0 on three hits and ties a Major League record last set in 1913 for most shutouts by a rookie pitcher (8).

Hideo Nomo throws a no-hitter, the only no-hitter pitched in Coors Field history in Denver, Colorado. Nomo wins 9-0 and it is the first no-hitter in baseball history thrown before a crowd of more than 50,000. Nomo would be named the 1996 National League Rookie of the Year.