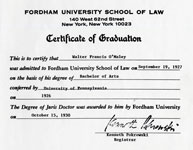 Walter O’Malley begins his studies at the Fordham University School of Law, attending night classes to enable him to work three jobs simultaneously during the day. He had previously enrolled at Columbia Law School in 1926, but transferred in order to attend night classes. The Fordham University School of Law was housed on the 28th floor of New York’s Woolworth Building, which was then the world’s tallest building.

San Francisco Mayor George Christopher writes a congratulatory letter to Walter O’Malley about the Dodgers winning the 1963 National League Pennant. Christopher writes, “Your team has played a tremendous season of baseball, and while San Francisco is disappointed that the Giants lost the flag, we are nevertheless very happy that it is going south instead of east.” O’Malley replies on September 25, “Between your Giants and our Dodgers we will do our best to keep those pennants flying in California.”

Walter O’Malley discusses his thoughts about revenue sharing with other Major League Baseball teams. At the time under National League rules, he had to give the visiting clubs 27 1/2 cents for each admission. “Under any profit-sharing plan in sports the responsibility is placed on the most industrious operators. The others count on them to be carried. I see no reason why the vultures should sit back, waiting for a morsel to drop. If they were placed on their own, they would make a stronger effort to produce more.” In answer to why the Dodgers have been successful in their attendance, O’Malley said, “We work at our business. If somebody is trying to reach us, they will find us in our office, not out on the golf course.” As far as Sandy Koufax returning to the Dodgers for the 1967 season, O’Malley said, “Let’s face it. Koufax is in a position to dictate. The dollar sign will be secondary. We will only set down two rules. One is that we won’t tolerate players negotiating as an entry and the other is that no player ask for a contract of more than a year at a time.”Melvin Durslag, Los Angeles Herald-Examiner, September 19, 1966

Walter O’Malley meets with Dodger front office executives and scouts at an end of season organization meeting. O’Malley notes in his appointment book, “Scouts — Good Draft Year.” The 1968 baseball drafts of January and June were better than good as they were the foundation of perennial contending Dodger teams in the 1970s and early 1980s. Among Dodger players drafted and signed that season were Davey Lopes, Ron Cey, Steve Garvey, Bill Buckner and Joe Ferguson.