Eight days after clinching their second consecutive National League Pennant, the Dodgers are the topic of an editorial “What the Dodgers’ Winning of Pennant Means to Brooklyn” in the Brooklyn Eagle. The editorial states in part, “No institution in our midst has done more to spread the fame of Brooklyn to the uttermost parts of the earth than the Brooklyn Dodgers Baseball Club. For years it has had the most colorful team, and during the regime of Walter O’Malley it has come to be recognized as one of the best in the major leagues. Furthermore, President O’Malley accepts the community responsibility that goes with leadership of such an outstanding institution and contributes generously to the charity and welfare organizations of the borough with special emphasis on youth...While the team excels in batting and fielding and all the arts of the game, it has been the personalities of the players, their fighting qualities and, above all, their colorful characteristics in action that have made them so popular. So the feat of the Dodgers in winning the National League championship for the second year in a row is not just another great sports victory. It has a meaning for this borough which we feel that many Brooklynites do not fully comprehend. It secures constructive publicity for our town wherever baseball is followed...So Pee Wee Reese and Roy Campanella and Carl Erskine and Duke Snider and Carl Furillo and Jackie Robinson and all their teammates may be far more than great baseball stars on a championship team. They may be — without their knowing or even thinking about it — ambassadors extraordinary for Brooklyn. This community is certainly fortunate to be represented by such a team.”Editorial, Brooklyn Eagle, September 20, 1953 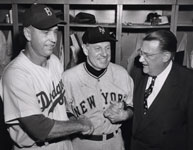 Walter O’Malley and first-year Dodger Manager Walter Alston extend congratulations to Leo Durocher, Manager of the Giants, in the visitor’s clubhouse at Ebbets Field after New York clinches the 1954 National League Pennant. The Giants beat the Dodgers, 7-1 and won the right to face the Cleveland Indians, the American League Pennant winners. O’Malley visited the Dodger clubhouse and said to the players, “This one is over. It was a rugged season. I feel sorry for you. I feel sorry for the fans, particularly because we lost to the Giants. I feel sorry for Alston. Let’s wrap it up now and play out the last five games. Forget about this season. Get ready for the next one. I hope everybody has a good winter.”The Sporting News, September 29, 1954 Also, on this date, comic strip boxer Joe Palooka is honored in the cartoon strip that day as he “receives” an award from the Brooklyn Dodgers at Ebbets Field.United Features Syndicate, September 20, 1954 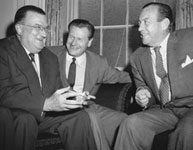 In last-ditch meetings to keep the Dodgers in Brooklyn, financier-philanthropist Nelson A. Rockefeller, Walter O’Malley and New York Mayor Robert Wagner meet at City Hall in New York City. Rockefeller’s plan included the purchase of land that the city would condemn in downtown Brooklyn for use by the Dodgers. Days later, the City’s Board of Estimate could not reach a decision in a three-and-a-half hour meeting to Rockefeller’s idea, since it placed an $8 million value on the land that he wanted to pay $3 million to purchase and lease back to the Dodgers.

In the final game played in the Los Angeles Memorial Coliseum, Walter O’Malley watches the Dodgers defeat the Chicago Cubs, 3-2, in 13 innings. Sandy Koufax pitches the entire game throwing more than 200 pitches and strikes out 15 batters. Ron Fairly singles home Wally Moon to give the Dodgers the win. Catcher Norm Sherry hit the last home run in the vast Coliseum, the Dodgers’ temporary home for four seasons. Manager Walter Alston says, “The Coliseum hasn’t been too bad to us. We won the pennant in here in our second year. In that respect it could have been a lot worse.” Gil Hodges commented, “I think it will be so much better for the players to get into a normal, regulation ballpark that it will make everyone feel like a new ballplayer. And I think the fans will certainly enjoy it 100 percent more than they have enjoyed baseball in the Coliseum.”Charlie Park, Los Angeles Mirror, September 20, 1961 Los Angeles City Councilwoman Rosalind Wyman presented O’Malley with a decorated cake as part of the celebration of the last game in the Coliseum.Bob Hunter, Los Angeles Examiner, September 21, 1961 The Dodgers finished with a 172-137 (.557) record in the Coliseum. The Dodgers were out-homered at the Coliseum in four seasons, 397-346. Interestingly, the Dodgers who hit the most home runs at the Coliseum during their four-year stay were Duke Snider and Charlie Neal, each with 38. While playing in the Coliseum, the Dodgers set single-game and World Series attendance records and hosted the first Major League All-Star Game and World Series west of the Mississippi.

Sandy Koufax goes the distance and defeats the Chicago Cubs, 3-2 in 13 innings. The Dodger win is their final game played at the Los Angeles Memorial Coliseum. Koufax fans 13 hitters, but more unbelievably, throws 205 recorded pitches in the game. The 205 pitches in the game are believed the third highest amount ever thrown by a pitcher since the totals have been recorded.

Leonard H. McRoskey, Director of the 11th Region of the United States Naval Sea Cadet Corps, writes a letter of appreciation from Los Angeles to Walter O’Malley. “Dear Walter, Thank you for the fourth time in four years for sponsoring Sea Cadet Night at Dodger Stadium. It was an exhilarating event that produced positive results for the Corps and the Navy Recruiting Command. Our honored guest, General James Doolittle USAF, was delighted with your team’s performance that evening. Thanks again, Walter, for your support of the young Navy.”