Jackie Robinson Day at Ebbets Field in Brooklyn is celebrated as all his Dodger teammates gather around him at home plate. The Dodgers defeat the New York Giants, 6-1. 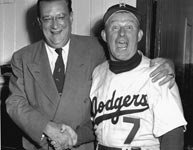 A delighted Walter O’Malley shakes the hand of Dodger Manager Charlie Dressen, who is also all smiles, as the Dodgers clinch the National League Pennant at Ebbets Field in Brooklyn with a 5-4 win over Philadelphia in the first game of a doubleheader. It was the first of 11 N.L. Pennants captured during the leadership of O’Malley. Bill Roeder of the New York World-Telegram and Sun wrote, “Above the row of lockers there was a television set. Andy Pafko, Clyde King and Bob Morgan stood in front of it, staring up at the screen on which Vince Scully, the announcer, was interviewing Pee Wee Reese and Walter O’Malley. It was between games of a doubleheader and Johnny Griffin, the clubhouse man, walked around shouting to the players to get ready for the next game. ‘Seven minutes, boys,’ he said.”Bill Roeder, New York World-Telegram and Sun, September 24, 1952 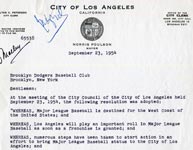 Walter C. Peterson, City Clerk of Los Angeles, sends a letter to Major League Baseball owners informing them of the City Council’s resolution which expresses its desire to bring a major league team to Los Angeles. 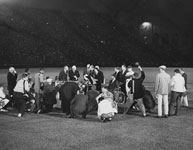 In Sam Balter’s “One for the Book” column in the Los Angeles Herald & Express, he writes, “WALTER O’MALLEY...In reminiscing after the finale at the Coliseum Wednesday night, Walter expressed pride that the Dodgers are the only team in history to fly pennants on both the Atlantic and Pacific Coasts. He recalls the Roy Campanella benefit game (exhibition against the New York Yankees when 93,103 set the all-time attendance record for a major league game) in ’59 as the most inspiring sight of the four-year tenure at the Coliseum. Some 20,000 were turned away that night, and Walter feels this was an incredible tribute to a player who had never once played in Los Angeles, but was adopted by the community because he had once been a notable Dodger.”Sam Balter, Los Angeles Herald & Express, September 23, 1961

Maury Wills steals second base in St. Louis to set a Major League record for stolen bases, breaking the old mark of 96 by Ty Cobb in 1915. Wills would steal 104 bases in 1962 and be elected the National League Most Valuable Player.

Under the purview of Walter O’Malley’s son Peter, the Director of Dodgertown, the Dodgers complete arrangements to purchase 110.4 acres of airport land, building and improvements from the city of Vero Beach with approval granted by the Federal Aviation Agency. The agreement benefited the city’s general fund as the land would go on the tax rolls. The nearly $134,000 paid by the Dodgers were to be “deposited in the Airport Fund for general aviation and improvements.”Vero Beach Press-Journal, September 24, 1964

In his Inter-Club Communication to Arthur E. “Red” Patterson, Walter O’Malley writes, “Dear Red: At the request of Mr. (Matsutaro) Shoriki, owner of the Yomiuri Giants in Tokyo, the Dodgers are assigning Kenny Myers and Tom LaSorda (sp.) as instructors to assist in the spring training program of the Yomiuri Giants in Japan next February.” No one had trouble spelling Tom Lasorda’s name when the O’Malley family named him as Dodger Manager on September 29, 1976, a position he would hold for 20 years. 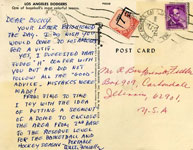 Walter O’Malley sends a Dodger Stadium postcard to inventor and designer R. Buckminster Fuller in Carbondale, Illinois regarding the building of the Astrodome in Houston, “Dear Bucky, Your letter brightened the day. I do wish you would come to Los Angeles for a visit. Yes, I suggested that Judge ‘H’ (Hofheinz) confer with you but he did not follow all the ‘good’ advice — mistakes were made! From time to time, I toy with the idea of putting a segment of a dome to enclose the area from 2nd base to the Reserve Level for the basketball and hockey season — portable.”

Patrick O’Boyle, Archbishop of Washington, D.C., writes a letter to Walter O’Malley about the success of the Dodgers in 1966, “Dear Walter: Wonderful going! I am following the Dodgers day to day. Keep them in the right direction — on top...My very best to Mrs. O’Malley and yourself.”