Walter O’Malley, Vice President and General Counsel of the Dodgers, is appointed as general chairman of the United Hospital Fund’s 70th annual campaign in Brooklyn. “Working under Mr. O’Malley’s direction will be a total of 2,645 workers, of whom at least half have already been enlisted for the Fall campaign,” notes the Bay News in Brooklyn.

Walter O’Malley tapes an interview with Tex McCrary and Jinx Falkenberg of the “Tex and Jinx Show,” a popular morning radio show in New York City.

Sal Maglie pitched the final no-hitter in Brooklyn Dodger history with a 5-0 victory over the Philadelphia Phillies at Ebbets Field. Maglie received a warm handshake and a $500 cash bonus (added to his contract) for his good work from Dodger President Walter O’Malley during the ensuing clubhouse celebration.

A special award of merit was conferred to Kay O’Malley for her orchid exhibit at the Annual Flower Show of the Second District of the Federated Garden Clubs of New York State. Kay and her husband Walter enjoyed many hours of relaxation in their greenhouses both in Amityville, New York and in Los Angeles cultivating exotic orchids.

Sal Maglie pitches a no-hitter over the Philadelphia Phillies in a 5-0 at Ebbets Field. The no-hitter keeps the Dodgers within a ½ game of first place with four games to play, a pennant the Dodgers would win by just one game. Maglie would be voted 2nd in the Most Valuable Player Award and 2nd in the Cy Young Award for the 1956 season. 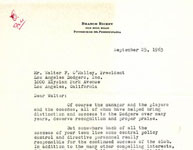 Branch Rickey writes a congratulatory letter to Walter O’Malley, a day after the Dodgers clinch the National League Pennant. “Dear Walter: Of course the manager and the players and the coaches, all of whom have helped bring distinction and success to the Dodgers over many years, deserve recognition and proper praise. But somewhere back of all the success of your team lies some central policy control and directive personnel really responsible for the continued success of the club. In addition to the many other compelling interests, I know you have had a full part in the artistic success of the team. I believe you will win the coming World Series. I deeply wish it so.” 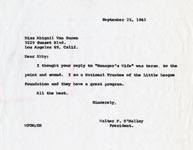 Walter O’Malley responds to Abigail Van Buren, better known as columnist “Dear Abby” about a letter from the wife a Little League manager. The manager was criticized by some parents for not using all of his players in an All-Star game. Van Buren had asked O’Malley to review her printed response. “I would like the opinion of an authority. You! Am I right, or not?” O’Malley responds, “Dear Abby: I thought your reply to ‘Manager’s Wife’ was terse, to the point and sound. I am a National Trustee of the Little League Foundation and they have a great program. All the best.”

Sandy Koufax shutouts the St. Louis Cardinals 2-0 and breaks the record for most strikeouts in a season with 349, breaking Bob Feller’s season record of strikeouts of 348. Koufax would finish the 1965 season with 382 strikeouts.