A motion by Walter O’Malley at the Joint Meeting of the Major Leagues at the Hotel Commodore in New York is adopted to convey to the widow of umpire Bill Klem the sorrow and sympathy of the members of the Major Leagues upon his death. Klem, who passed away on September 16, 1951, was posthumously inducted into the Baseball Hall of Fame on September 28, 1953. The colorful Klem worked 18 World Series. At the National League Special Meeting on the same day, O’Malley was elected as a league representative on the Executive Council filling out the term of Ford C. Frick, who became Commissioner of Baseball on September 20. A permanent vote was to take place at Baseball’s annual meeting on December 8, 1951. It was the beginning of a 28-year tenure on the decision-making body of Major League Baseball, the longest term of any owner in history.

After the Dodgers fell to the New York Yankees in a seven-game World Series, star Jackie Robinson writes an article in the Long Island Daily Press in which he states, “As we sat despondently in the dressing room after the game, Mr. Walter O’Malley came in to console us. His sentiments were greatly appreciated. But nothing could take away the sting of losing our big series. Certainly all of us played every second of that Series just as hard as we could. But it hurt so badly because we had such a perfect opportunity to bring Brooklyn its first world championship.”Jackie Robinson, Long Island Daily Press, October 8, 1952 The Dodgers led the World Series, three games to two, before losing the final two games at Ebbets Field. 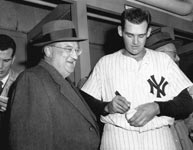 After pitching a 2-0 perfect game in Game 5 of the World Series for the New York Yankees, Don Larsen autographs a baseball for Dodger President Walter O’Malley in the Yankees clubhouse. O’Malley briefly visited the Yankees clubhouse to congratulate Larsen. It is the only perfect game ever thrown in a World Series. A crowd of 64,519 cheered on Larsen at Yankee Stadium. The Yankees take a three games to two lead in the Series which returned to Ebbets Field for the final two games.

The Dodgers announce that they will draft the Los Angeles territory for the 1958 season, after having exhausted all options with New York elected officials to remain in Brooklyn and build, own and maintain a privately-financed domed stadium. Walter O’Malley cited four reasons the Dodgers were unable to remain in Brooklyn after a decade of exploring options with the city to assemble land in order to build his own stadium. His four reasons, “1 -- The desire for a new ball park to replace the aging and outmoded Ebbets Field. 2 — Insufficient parking space adjacent to the ball park. 3 — Dwindling attendance. 4 — A New York City amusement tax of 5% on admissions.”Los Angeles Times, October 9, 1957 In 1956 and 1957, the Dodgers played a total of 15 “home” games at Jersey City, New Jersey’s Roosevelt Stadium, as O’Malley sent a message to elected officials that there was an urgency in getting a response to his quest for land and a final solution to the aging Ebbets Field problem.

The Dodgers announce they are becoming the Los Angeles Dodgers for the 1958 season and opening up the West Coast to Major League Baseball. 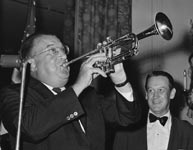 The Dodgers win the World Championship as they defeat the Chicago White Sox, 9-3, and win the series four games to two. In only their second season in Los Angeles, the Dodgers capture the second World Series title in their history. The World Series boosts the L.A. economy an estimated $3 million in a four-day period by 23,146 Southland visitors, according to area Chamber of Commerce estimates. Walter O’Malley hosts a Victory Celebration for the World Champions at the Waldorf Room of Chicago’s Conrad Hilton. He was so happy that he borrowed a musician’s trumpet at the party and started playing. The menu included jumbo gulf shrimp, roast baron of beef, roast turkey, glazed sugar cured ham, au gratin potatoes, vegetable medley, imported and American cheeses, French pastry and Charles Heidsieck Methuselahs of Champagne. Dodger broadcaster Vin Scully conducts interviews with players, executives and wives from the hotel, airing on KTTV Channel 11 in Los Angeles.

Larry Sherry gets his second win of the 1959 World Series by pitching 5 2/3 innings in relief and the Dodgers win their first World Championship in Los Angeles as they defeat the Chicago White Sox, 9-3.

Walter O’Malley is the host for a celebration of the career of retiring Baseball Commissioner Ford C. Frick at The Stadium Club at Dodger Stadium. Frick served as Commissioner from 1951-65. The invited guests from the baseball world, including 100 writers covering the World Series, were treated to dinner and a film clip showing O’Malley’s performances in the television show, “Branded”. O’Malley portrayed a frontier doctor putting a bandage on Chuck Connors, the star of the series and a former Dodger in 1949. O’Malley couldn’t resist mentioning that the dinner had been planned to be held in San Francisco during the World Series, showing his pride in the Dodgers’ pennant win. In addition, O’Malley made reference by the recent visit of Pope Pius IX in Yankee Stadium. “The Pope went into Yankee Stadium,” said O’Malley, “and, he took all the Cardinals with him.”Bob Hunter, The Sporting News, October 23, 1965

Columnist Melvin Durslag writes in the Los Angeles Herald-Examiner an article which was reprinted in The Sporting News about Walter O’Malley shines his own shoes. Durslag queries O’Malley, “How can a man of your affluence polish his own footwear?” O’Malley told Durslag, “The kind of shine I give would cost you a buck,” a considerable sum in 1966. O’Malley also stated his principle of success, his club having drawn two million or more fans at home in seven of nine seasons in Los Angeles. “We work at our business. If somebody is trying to reach us, they will find us in our office, not out on the golf course.”Melvin Durslag, The Sporting News, October 8, 1966