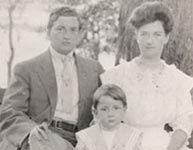 The only child of Edwin Joseph O’Malley and Alma Feltner O’Malley, Walter Francis O’Malley is born in the Bronx, New York. 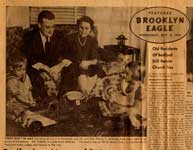 A feature in the Brooklyn Eagle prominently shows Walter O’Malley and his family in a large photograph, as well as in the text of an article about the popular Bedford section of Brooklyn. “The Bedford section has always been a favorite residential area for the legal profession and it still is. Mr. and Mrs. Walter O’Malley live...in one of the attractive apartment buildings of the area. Mr. O’Malley is a lawyer with offices at 60 E. 42nd St., Manhattan. He is prominent in borough affairs, active on civic committees and a member of the Brooklyn Club. Mrs. O’Malley is the former Miss Kay Hanson, daughter of former Judge Peter B. Hanson and Mrs. Hanson. They have two children, Terry, 7, who attends Froebel Academy, and Peter, not yet 3.”Jane Corby, Brooklyn Eagle, October 9, 1940 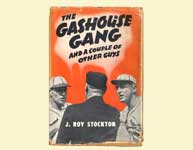 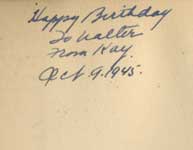 Kay O’Malley presents her husband Walter with a book “The Gashouse Gang” as a present for his 42nd birthday. She inscribes the book “Happy Birthday To Walter From Kay. Oct. 9, 1945” By J. Roy Stockton, “The Gashouse Gang” features the story of the famous players (Dizzy and Paul Dean, Pepper Martin and Joe Medwick) and teams of the St. Louis Cardinals.

Walter O’Malley writes a letter to Thomas M. Goodfellow, President of the Long Island Railroad, regarding progress towards a dome stadium site for the Dodgers at the intersection of Atlantic and Flatbush Avenues to replace aging Ebbets Field. “I will be leaving for Hawaii and Japan (1956 Dodger goodwill tour) but I want you to know that the Stadium Authority (Brooklyn Sports Center Authority) is coming along wonderfully well and we are now back to the original site and the original design and it looks like Capt. (Emil) Praeger will be our engineer and of course he will want to cooperate very closely with you and your people.” All modes of transportation, including the terminal for the Long Island Railroad and every subway line, merged at the proposed site.

Jackie Robinson drives in the only run of the game as Clem Labine pitches 10 innings and the Brooklyn Dodgers beat the New York Yankees, 1-0 in Game 6 of the 1956 World Series. The base hit by Robinson would be his last in a post-season role with the Dodgers.

In its editorial “Los Angeles, the Dodgers’ Home,” the Los Angeles Times states, “Los Angeles now has a baseball club in the National League. That’s official. Walter O’Malley, the Dodgers president, has proclaimed, pursuant to the protocol of organized baseball, that he has drafted this territory. This is good news not only for Los Angeles fans but for devoted partisans of baseball wherever they are. New territory and new enthusiasm are what the major leagues need, and Los Angeles, plus San Francisco, will give them a massive dose of this mixture. Los Angeles is capable of doing for the Dodgers what Milwaukee did for the Braves. And the action is reciprocal; a going baseball team is a civic asset...The Dodgers will open their home next April at Wrigley Field. Then in 1959 they will play in the new stadium O’Malley will build for them in Chavez Ravine. The site of this ball yard was the center of the conflicts in the Council. Some years ago, right after this ravine site had been recaptured from the housing authority which intended to cover part of it with low-rent tenements, it was suggested (here among other places) that the area would provide a fine central spot for a major league ball park — with room to spare. All it needed was leveling and access roads. So the idea of using Chavez Ravine was not born with the Dodgers negotiations.”Los Angeles Times, editorial, October 9, 1957

M. K. Bankert, in charge of the U.S. Weather Bureau’s records in Los Angeles, says that the site where Walter O’Malley will build his 50,000-seat stadium for the Los Angeles Dodgers is an ideal spot in which to play baseball. The area, noted Bankert, is protected from night chill and winds, and also from night fog. He studied night temperatures for a 10-year period for the months of May to September and found the average temperatures from 8-11 p.m. to be 61 degrees in May; 63 degrees in June; 67 degrees in July and August; and 66 degrees in September.Los Angeles Times, October 9, 1957 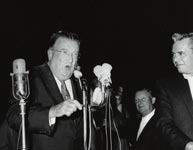 As the newly-crowned World Champion Los Angeles Dodgers arrive home from Chicago, an estimated crowd of 5,000 fans greet them at the Los Angeles International Airport. “Biggest single feminine contingent was the St. Michaels Hi group, 150 strong, who arrived early in the afternoon with a huge sign and led the crowd in singing happy birthday to Walter O’Malley (celebrating his 56th birthday) when the plane landed.Los Angeles Times, October 10, 1959 Also, Larry Sherry, Fairfax High School (L.A.) and World Series hero, who won two games and saved two more for the Dodgers in the World Series against the White Sox, was roundly cheered and welcomed home by the crowd. In attendance were Los Angeles Mayor Norris Poulson, Councilwoman Rosalind Wyman and County Supervisor Ernest Debs. The emcee of the celebration was Desi Arnaz, husband of Lucille Ball. Arnaz told the audience, “The way these guys came back in the second playoff game was the greatest thing I ever saw in sports. If somebody came in and showed me a script like that I’d throw the bum outta my office.” One reporter said of the victory celebration, “This may not have been the biggest welcome celebration in the city’s history, but it was certainly the most enthusiastic.”The Sporting News, October 21, 1959

Page 1 of the Los Angeles Examiner features a pennant-shaped banner with the words, “1959 World Champions L.A. Dodgers” and a cartoon by Karl Hubenthal of a globe with an “LA” Dodger cap sitting atop.

Los Angeles Angels’ Chairman of the Board and singing cowboy Gene Autry sends a telegram wishing Walter O’Malley a Happy Birthday. He writes, “I’m sorry that it could not have been happier by the Dodgers winning the pennant but next year will be another year and I am sure you will be right there at headquarters. My kindest personal regards.” Autry’s Angels shared Dodger Stadium with the Dodgers for four seasons (1962-65).

Walter O’Malley writes this memorandum to all members of the Dodger organization following a World Series sweep of the New York Yankees. “I will be leaving for a vacation in Africa even before I get a chance to sign this but I want to set it down as sincerely as I can that I am personally most appreciative of the way each member of this organization pitched in to help us have our greatest season and to win our most spectacular World Series Victory. All department heads and all our folks in those departments up and down the line are most definitely included in my appreciation. I think we came closer to becoming a great organization this year than ever before and just between us it was a pretty important year for it to happen. Thank you all. Most sincerely, Walter F. O’Malley”

In the New York Journal-American, the popularity of Dodger players is shown as baseball fans Mr. and Mrs. Eddie A. Turner name their triplets for Don Drysdale, Ron Perranoski and Sandy Koufax. “Little Sandy, however, is a girl. The triplets, Donald Scott Turner, Sandy Turner and Ronald Peter Turner were born Sunday morning, the day the Dodgers defeated the New York Yankees for the fourth straight game.”Associated Press, New York Journal-American, October 9, 1963

A disappointing 63rd birthday for Dodger President Walter O’Malley, as the Baltimore Orioles complete a four-game World Series sweep of the Dodgers. The Orioles won the deciding game in Baltimore, 1-0. It is the Dodgers’ third World Series appearance in four years. O’Malley entered the Orioles’ clubhouse shortly after the final out to pay homage to Baltimore Manager Hank Bauer and other team executives. “I want to congratulate you,” said O’Malley. “You did a great job.”The Sporting News, October 22, 1966

Mike Scioscia ties Game 4 of the 1988 National League Championship Series with a two-run home run off Dwight Gooden of the New York Mets. Scioscia hit only eight home runs in 1988. Kirk Gibson’s 12th inning home run wins the game for the Dodgers, 5-4 and Orel Hershiser gets the final out for a save.