Upon word that the Dodgers have drafted the Los Angeles territory for the 1958 season, Bob Curzon of the Vero Beach Press-Journal writes, “It is now official. Vero Beach is now the spring training site of the Los Angeles Dodgers...The news came over the air at 3 p.m. Tuesday afternoon that Walter F. O’Malley and Company will follow Horace Stoneham and his Giants to the West Coast...President O’Malley has said on four different occasions that the Dodgers would continue their spring training operations here. The TV and radio comedians will have a field day from now on. Can you imagine a California baseball team training in Florida??? It’s going to happen in 1958...Have you noticed? We haven’t had any smog for the past 82 and a half years???”Bob Curzon, Vero Beach Press-Journal, October 10, 1957

Assistant General Manager Arthur E. “Red” Patterson responds to Dodger fan Harold B. Johnson of Kingman, Arizona for sending a copy of a recent editorial from the Mojave County Miner about Walter O’Malley and the Dodgers. “Mr. O’Malley is enroute to a safari in Africa,” writes Patterson. “He asked me to drop you a line and request you forward his personal thanks to Mr. Dick Waters for his fine editorial. We’re happy he enjoyed his visit to Dodger Stadium.” In his editorial, Waters wrote, “Mr. O’Malley gets kicked around a lot in Los Angeles but in our book he deserves the best. They ought to elect him mayor. He brought major league baseball to the coast — and he built a stadium that should be part of the National Parks system. It is the most beautiful, comfortable ball park in all the land — and it would be fun to visit even if they weren’t playing ball. We’ve been more than one major league ball park in our day and we can truthfully say that none compares with Mr. O’Malley’s place. The park is spotlessly clean, there are no bad seats, and the food and beverages are wonderful. This is a place where any family — no matter how wide the age differences of the children — can enjoy an evening, or two or three, and can have the time of their lives. And when you can’t go to the games, you can always enjoy America’s best baseball announcers — Vin Scully and Jerry Doggett.” 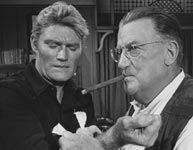 Playing a bit part of a frontier doctor on the popular TV series “Branded,” Walter O’Malley makes his debut as an actor. O’Malley was “Doc Woods” (the same name as the actual Dodger team doctor) on the episode “Bar Sinister” which first aired on this date. Starring in the series was former Dodger Chuck Connors. O’Malley was paid $300 for his time, but donated the check to the Motion Picture Relief Fund.

Jim “Junior” Gilliam, who played his entire 14-year career with the Dodgers and later was a Dodger coach, had his uniform number 19 retired posthumously, following his death at the age of 49 prior to the start of the 1978 World Series. The Dodgers wore a commemorative patch on their sleeves in Gilliam’s honor during the World Series. Gilliam is the only non-Hall of Fame Dodger to have his uniform number retired. In 1965, Walter O’Malley hired Gilliam, an African-American and Preston Gomez, a Cuban, as Dodger coaches. In 1978, the Dodgers initiated the Jim Gilliam Award representing the team's World Series MVP.

The Dodgers defeat the New York Mets, 7-4 in Game 5 of the National League Championship to take a 3-2 series lead. Kirk Gibson hits a three-run home run and Brian Holton pitches 1 2/3 scoreless innings for the save.