Walter O’Malley graduates with his law degree (LLB) from Fordham University School of Law by attending classes at night on the 28th floor of the Woolworth Building (then the world’s tallest building) in New York.

The New York World-Telegram reports that Walter O’Malley had an interest in Bill Terry managing the Dodgers prior to the Walter Alston hire on November 24, 1953. Terry, the former New York Giants skipper, said, “Walter O’Malley asked me if he could interest me in the job, and I told him I might take it if the financial consideration were sufficiently high.” However, according to the story, Terry wanted more than double what the Dodgers were offering and he didn’t accept. “I often wonder how I would have come out if I had taken the Brooklyn job,”1 Terry said.New York World-Telegram, October 15, 1956 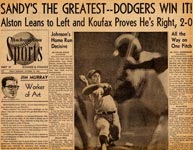 The headline in the Los Angeles Times, following the seven-game World Series victory by the Dodgers over the Minnesota Twins, reads: “SANDY’S THE GREATEST — DODGERS WIN IT! Alston Leans to Left and Koufax Proves He’s Right, 2-0” Dodger Manager Alston selected left-hander Koufax on two days’ rest to pitch, instead of starting right-hander Don Drysdale in the seventh and deciding game. At the time, Alston explained his decision, “Both Don and Sandy are ready and given my choice against Minnesota I would prefer to use a left-hander. And I can’t think of anyone I would rather bring in from the bullpen in a tough situation than Drysdale.”Los Angeles Times, October 15, 1965 The Los Angeles Herald-Examiner Page 1 headline reads, “HAIL THE CHAMPS! Thousands Greet Dodgers”

Walter O’Malley and Angels’ President Robert O. Reynolds make a joint motion proposing sweeping changes to the Office of the Commissioner of Baseball. The recommendations would create a new front office staff consisting of the positions of Administrator, Deputy Commissioner for Player Affairs, Secretary for Broadcasting, Secretary for Public Information and Secretary for Amateur Baseball. In the proposal made to the other ownership, O’Malley and Reynolds saw the need for expanding and centralizing the Commissioner’s office duties and responsibilities to grow the game. They wrote, “This program should enhance the dignity of the office of Commissioner, and free him to use more of his time as the public symbol of Baseball. His age and the term of office would not be the important factor it otherwise would be — as we would have a competent staff capable of serving in an emergency.”

Walter O’Malley congratulates Dodger broadcaster Vin Scully on the birth of his daughter Erin. “The new Dodger policy welcomes brand new Dodgerettes with a modest U.S. Savings Bond. Enclosed is one for Erin. With all good wishes.”

Responding to Jerry Doggett’s note about the Dodger broadcaster’s fine round of golf, finishing one under par, Walter O’Malley writes, “I have the impressive news, with your skill and my handicap we will take anyone on who wants to challenge us. I leave in the morning for Silverado to take a crack at the Kaiser Open and next week when I return I will check out your vacation plans to see when we can get together. Jerry, I do thank you for your wonderful work all season. You know how I feel about you.”

Walter O’Malley sends a note to Dick Williams, Manager of the Oakland Athletics, prior to Game 3 of 1973 World Series between the New York Mets and the Athletics. Williams was an outfielder for the Dodgers in 1951-54 and 1956. O’Malley writes, “Dear Dick: I have to root for you even if it is an American League team that will be in the World Series because once a Dodger always a Dodger. Seriously, Dick, in my book you continue to do a great job and I do congratulate you.” Six days later, Oakland won the World Championship by beating the Mets, 5-2 in Game 7.

Kirk Gibson hits a dramatic two-out, two-run home run on a full count in the 9th inning and the Dodgers defeat the Oakland A’s 5-4 in Game 1 of the 1988 World Series. The Gibson home run is later voted the greatest moment in Los Angeles sports history.