In the fall prior to the opening of Holman Stadium in Vero Beach, Florida, Walter O’Malley writes to David A. Bisset, Superintendent, Plant Introduction Garden of the United States Department of Agriculture in Savannah, Georgia. O’Malley is following up on a phone conversation with Bisset and writes, “We are anxious to make experimental plantings at the earliest possible time and that is what prompted my inquiry to you...The stadium, while it will be the headquarters for the Brooklyn Dodgers and their 18 farm clubs during baseball’s spring training, will otherwise be dedicated to public use on a non-profit basis. We are anxious to achieve a maximum of attractiveness by way of unusual plantings as the design of the stadium depends on the plantings for eye appeal. I am sending under separate cover a location map which will give you an idea of the vast area of land that we have and the thought occurred to me that you might wish to make some experimental plantings on this land, which we would be only too happy to permit.”

Walter O’Malley writes a letter to Judge L. M. Merriman of Vero Beach, Florida, regarding his lake on the Dodgertown property, as well as the naming of the new stadium there. “They were filling the fish pond last week and I can see where it will take some pretty good size fish in order to get the maximum of promotional publicity. A private fishing pond is a good recreational facility for a baseball club in spring training...The photographers are always looking for a special angle to get an interesting picture and this would be the only baseball spring training camp with its own fish pond. I would like your advice on another subject. We plan to name the stadium ‘Holman Stadium’ as a gesture on the part of the Dodger organization to the citizens of Vero Beach who have made our stays there so pleasant. It seemed appropriate to select Bud Holman for this honor as he is a booster for Vero Beach and the Dodgers as well. I think a citizens committee should be formed to plan a proper dedication...Would you be good enough to let me know who might best act as chairman of such a committee. How about the publisher of the newspaper. There will be considerations that will have more significance to you than they would to me and that is why I would like to have your advice.”

According to Associated Press, “Charlie Dressen today officially surrendered the managerial reins of the National League champion Brooklyn Dodgers to pilot the Pacific Coast League Oakland club.” In making the announcement, Dressen said he was leaving the Dodgers “with no malice whatsoever” and with “nothing but the highest regard for the Brooklyn organization” from President Walter O’Malley down. “I’m still a Dodger rooter, I always have been,” said Dressen. “I’m still going to work with the Dodgers. O’Malley has promised to send some players to Oakland for me to develop for him. That ought to prove that we’re parting the best of friends.”1 Associated Press, October 16, 1953 A forceful letter was crafted by Dressen’s wife Ruth and sent by Manager Dressen to O’Malley. It was so strong “O’Malley said he ‘didn’t want it kicking around the files’ of the Dodgers’ front office. He returned the letter to Dressen and magnanimously told him to forget he ever wrote it.”Ed Pollock, The Evening Bulletin, October 16, 1953 Dressen returned to the Dodgers as a coach in 1959-60.

Ed Pollock, writing in The Evening Bulletin in Philadelphia, “The Dodgers prexy isn’t known well to Philadelphia fans, although more than a quarter of a century ago he was a big wheel at Penn. One alumnus remembers that he built the ‘strongest political machine ever’ on the campus. As a senior in the Class of 1926, O’Malley won most, if not, all the top honors. He was elected spoon man, considered the highest honorary award open to members of the graduating class. He also was his senior class president and his junior class president, one of few students in the history of the university to preside over his class for two successive years. The list of his undergraduate activities was as long as any in the class record. He was chairman of the Undergraduate Council and a member of the Council on Athletics. He was the salutatorian at the graduating exercises and earlier served as a member of the Christian Association cabinet. The class record book says his nickname was ‘The Turk.’ One classmate couldn’t recall the sobriquet and knew no reason why he should be so labeled. Another said he should have recognized O’Malley in college ‘as a born politician and promoter.’”Ed Pollock, The Evening Bulletin, October 16, 1953

Walter O’Malley purchases a full-page ad in The Sporting News in celebration of the Dodgers’ World Series Championship. In the ad, signed by the front office executives, O’Malley writes, “The entire Dodger organization is mighty proud of the way our Dodgers came from behind and earned the right to take on the Minnesota Twins in the 1965 World Series. And we’re proud, too, of the tremendous enthusiasm of baseball fans for our Dodgers. Los Angeles became the first city in baseball history to support a team with more than 2,000,000 fans for the SIXTH time.” 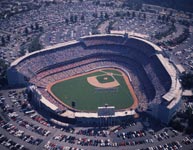 Capt. Emil H. Praeger, who designed Dodger Stadium in Los Angeles and Holman Stadium in Vero Beach, Florida, passes away in Manhasset, New York at the age of 81. According to his obituary by Associated Press, Praeger “designed special floating concrete breakwaters used during the Allied invasion of Normandy in World War II. Praeger was also responsible for structural engineering in construction of the General Assembly meeting hall and underground parking garage of the UN Headquarters in New York. During World War II, Mr. Praeger was design manager of the Navy’s Bureau of Yards and Docks and served on a committee named to implement British Prime Minister Winston Churchill’s idea of protected harbors for the invasion of Europe.”Associated Press story, Los Angeles Times, October 19, 1973 Praeger also was the consulting engineer for the White House renovation in 1949.

Orel Hershiser shuts out the Oakland A’s, 6-0 in Game 2 of the 1988 World Series and gets three hits himself and scores a run.