Frustrated by the plan to distribute tickets for a quick turnaround playoff game, Walter O’Malley shares ideas about the future with Harold C. Burr of the Brooklyn Eagle. “We are trying to work some simple plan that would please everybody. Baseball is the only business in the world where the regular customers are kicked out and people who never enter a ball park are given the choice seats for the big games. That isn’t right. It’s more than that. It’s atrocious. It’s physically impossible to sell out a ball park on 30 minutes notice so that everybody gets the seat he wants. That was about all the time we had left when the National League race ended in a deadlock for us on a Sunday in Philadelphia. Monday morning — and the first playoff game was at Ebbets Field that same afternoon...The fan on the street was instructed to go to Ebbets Field to buy their tickets. Everyone piled into our office downstairs and we were snowed under...Our system had been bad and we’ve got to correct it in the future.”Harold C. Burr, Brooklyn Eagle, October 18, 1951

While on vacation, Walter O’Malley dictates a letter to John V. Tunney, United States Senator from California regarding Baseball’s anti-trust exemption and movement of teams, as it relates to Washington, D.C. “John, Baseball has not been generally exempted from anti-trust considerations. All of our business activities are subject to these laws as they should be. I believe the exemption is limited to the reserve clause and territorial protection...I am sure no one in Washington would be concerned if General Motors, Safeway Stores, or let us say, U.S. Steel, were to move their main office from one city to another. Baseball, however, seems to attract considerable attention when this is done even if it is done for valid economic reasons. I once asked two members of Congressman Emanuel Celler’s Committee if they would consider investing their own money to keep and operate a franchise in a city where it was evident that annual losses would make this unwise. The only real relocation by a club having made money was the move of the Brooklyn Dodgers to Los Angeles. That was done only after a well documented campaign on the part of the Brooklyn Dodgers to stay in Brooklyn had been conducted. Only after 10 years efforts to secure political approval under the Brooklyn Sports Center Authority to keep the Dodgers in Brooklyn was the decision made to move. In that case the Dodgers did not ask the City to spend one cent to build new roads, provide additional parking, or to build a stadium. The Dodgers offered to build the stadium with its own money and stated that the stadium and real estate would be on the tax rolls. It is interesting to note that none of the other stadiums built with money provided by various means, bond issues, etc. are on the tax rolls. The Dodgers in Los Angeles pay $850,000 a year in real estate taxes. The stadium was completely financed by the Dodgers themselves and not by the city...Baseball, to be competitive, requires that an owner have sufficient earnings to do the things that profit money would make it possible to do...It is my conclusion, John, that Baseball operated honorably, and does not need different legal rules, commissions or Congressional action. I say the above in all sincerity.” 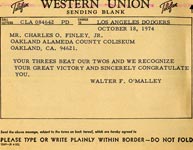 Following the five-game World Series defeat to the Oakland Athletics, Dodger Chairman of the Board Walter O’Malley sends this telegram to Oakland owner Charlie O. Finley, “Your threes beat our twos and we recognize your great victory and sincerely congratulate you.”

Walter O’Malley thanks Tom Downs of Downs and Edwards in Lansing, Michigan for sending a copy of the Pulitzer Prize-winning book by Robert A. Caro “The Power Broker, Robert Moses and the Fall of New York”. “You were the thoughtful one to have me in mind and I have thoroughly enjoyed reading about my friend, benefactor and enemy, Robert Moses. As to friendship, Bob and I knew each other over a long scan of years and we were very close. Bob became an enemy when he sabotaged our plans to build a stadium in Brooklyn. He became a benefactor when his opposition became so violent that we left Brooklyn and happily became established in California.”

The New York Yankees defeat the Dodgers, four games to two, to win the World Series, the first postseason meeting between the clubs in 14 years. The Dodgers won Game 2 in New York, only to return to Dodger Stadium where they lost two of three games. In the final game in Yankee Stadium, New York won 8-4.