Walter O’Malley and his two Vice Presidents E.J. “Buzzie” Bavasi and Fresco Thompson embark on a trip to Florida and the Carribean to observe 12 Dodgers playing in winter baseball. The first stop of the trip is Dodgertown in Vero Beach, Florida and then on to Miami, followed by Cuba and Puerto Rico.Harold C. Burr, Brooklyn Eagle, October 19, 1954 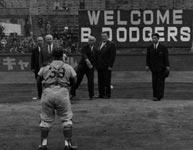 In the opening game of their goodwill tour to Japan, the Brooklyn Dodgers lose to the Yomiuri Giants, 5-4, at Tokyo’s Korakuen Stadium before 20,000 fans. Matsutaro Shoriki, owner of Yomiuri and the “father of professional baseball in Japan,” throws the ceremonial first pitch following ceremonies in which Walter O’Malley and National League President Warren C. Giles are introduced to the crowd.

The United States Supreme Court denies an appeal request and dismisses the case trying to block the City of Los Angeles from entering into its previously approved contract with the Dodgers for land at the Chavez Ravine location. With this last legal hurdle cleared, Walter O’Malley proceeds with privately building Dodger Stadium. O’Malley states in a press release, “We trust the decision will remove any further political delays so that we may proceed to build the beautiful Los Angeles Dodger Stadium and recreation area. I look forward to a spirit of cooperation and understanding among all public officials that will permit us to complete the Stadium at the earliest possible date next fall. I wish to give our sincere thanks to the voters and public officials of the City and County of Los Angeles who have supported the Dodger contract. The decision re-affirms, and again vindicates, their judgment. I do hope there will be an end to further dilatory tactics.” O’Malley also said he hoped to make arrangements to secure a fair lease with the Los Angeles Coliseum Commission to continue to play home games in the Coliseum until the new stadium opens.

Los Angeles Mayor Sam Yorty sends a letter to Walter O’Malley following the Dodgers’ 1965 World Series Championship celebration. “Dear Walter: Just want to say thanks for a most enjoyable evening at the Victory dinner. It was a great event and my latest night out in years! Cordially, Sam”

Rick Monday homers in the top of the 9th inning as the Dodgers defeat the Montreal Expos, 2-1 to win the National League Championship Series in Montreal. Fernando Valenzuela pitches 8 2/3 innings for the win and Bob Welch gets the final out of the game for the save.