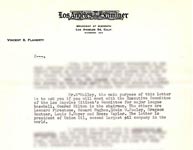 Vincent X. Flaherty, columnist of the Los Angeles Examiner makes initial contact with Dodger President Walter O’Malley to drum up interest in Los Angeles as a possible city for Major League Baseball. “Mr. O’Malley, the main purpose of this letter is to ask you if you will meet with the Executive Committee of the Los Angeles Citizen’s Committee for major league baseball. Conrad Hilton is the chairman. The others are Leonard Firestone, Howard Hughes, Edwin W. Pauley, Gregson Bautzer, Louis B. Mayer and Reese Taylor. The latter is president of Union Oil, second largest oil company in the world...It would be worth your time even to explore the local situation. You probably know much about Los Angeles, but let me remind you that it never rains during the baseball season in Los Angeles. Major league baseball loses thousands of dollars every year just by threatening weather...There is a move afoot to bring an American League team here. It will happen by 1955 at the latest and I suppose you know the team I mean. The league that takes Los Angeles and San Francisco will be the strong league, the top league for years to come. I’d rather see the Dodgers here than five teams such as the one to which I alluded.” Flaherty continued his letter writing campaign to O’Malley for years, always promoting Los Angeles for the major leagues. He also endorsed the Los Angeles Memorial Coliseum as a temporary home for a baseball team.

Sid Ziff writes in his column in the Los Angeles Times that he attended a press party for an NBC variety show starring Bob Hope which will feature 1963 World Series stars Sandy Koufax, Don Drysdale and Tommy Davis from the Dodgers. At a rehearsal luncheon, Ziff asked comedian Hope if he was surprised that the Dodgers won the World Series in four straight. “‘Not as surprised as the Yankees,’ sobbed Hope. ‘What advice would you have for Walter O’Malley next year?’ ‘Sell,’ said Hope, with a fast smirk.”Sid Ziff, Los Angeles Times, October 20, 1963

The National League Champion Dodgers begin a goodwill trip as they arrive at Tokyo International Airport in Japan. It is the second tour for the Dodgers in a decade. The trip was sponsored by the Yomiuri Shimbun, a Japanese newspaper, and the Dodgers concluded the tour with a 9-8-1 overall record. Baseball Commissioner William D. Eckert, who brought greetings to Japan from President Lyndon B. Johnson, joined the Dodger traveling party of nearly 80. The 1966 itinerary provided the Dodgers and their wives with many sightseeing opportunities and cultural exchanges. Walter O’Malley, who said it was a “great privilege and pleasure for the Dodgers to return to Japan after 10 years,” also congratulated the Yomiuri Giants for winning Japan’s World Series against the Nankai Hawks. O’Malley was asked at the airport, “Will the Dodgers make a special effort to defeat Japan’s champions, the Yomiuri Giants?” He replied, “Yesiree!”Lee Kavetski, Pacific Stars & Stripes, October 22, 1966

The Student-Faculty Lounge at the Mayo Medical School in Rochester, Minnesota is dedicated in honor of Walter and Kay O’Malley by Dr. W. Eugene Mayberry, Chairman of the Board of Governors of Mayo Clinic.

Orel Hershiser is named the Most Valuable Player of the 1988 World Series as he defeats the Oakland A’s 5-2 in Game 5. Mickey Hatcher hits a two-run home run in the first inning and Mike Davis homers as the Dodgers win their sixth World Championship.