Walter O’Malley sends a telegram to praise Dodger pitcher Carl Erskine, who is honored at a dinner by more than 600 fans in his hometown of Anderson, Indiana. With Erskine on the mound, the Dodgers beat the New York Yankees in Game 5 of the World Series, 6-5 in 11 innings. After the Yankees scored five runs in the fifth inning, Erskine retired the next 19 batters in order to earn the victory.

David A. Bisset, Superintendent, U.S. Department of Agriculture, Plant Introduction Garden in Savannah, Georgia, responds to Walter O’Malley’s letter of October 16 regarding appropriate plantings for the embankment at Dodgertown’s new Holman Stadium: “I am particularly interested in your longhand note attached to your letter in regard to the use of bamboo for a fence on the outside of the stadium. Our experience here has indicated that bamboo of the genus Phyllostachys makes excellent material for fences...I feel, however, that you will find bamboo material for fence purposes rather costly...Should you be interested in establishing the boundary with a living fence or hedge, you may be interested in establishing such barrier with some of the low-growing species of Bambusa. Plants of this species produce many stems in close proximity to each other.” Bisset informs O’Malley that his letter and blueprints of Holman Stadium and its grounds have been referred to project leader Dr. W. H. Hodge in Beltsville, Maryland for additional ideas.

Los Angeles City Engineer Lyall A. Pardee recommends to the Board of Public Works, Board of Traffic Commissioners and Board of Recreation and Park Commissioners that the request of the “Los Angeles Dodgers to construct, maintain, and use a detour road for public access to the Los Angeles Police Academy on the north-easterly extension of Boylston Street, pending construction of the Solano Street extension, be granted” subject to certain grading conditions. The Dodgers requested this detour road “to provide access to the Police Academy because of a pending work stoppage of their grading operations due to the lack of suitable fill areas.”1

Following a trip with Dodger Director James Mulvey to Wyoming, Walter O’Malley writes Chuck Ogburn, Sheriff of Carbon County in Rawlins. “One of the proud possessions I brought back from Wyoming was the thoughtful badge with my name on it that you gave me. I have shown it to Sheriff Peter Pitchess of Los Angeles County and told him it was a shame his budget was not big enough to do likewise here. He threatened to frame me and throw me in the clink.” 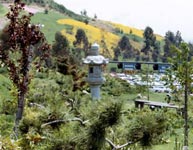 The 3,921-pound Japanese “Kasuga” stone lantern arrives at Dodger Stadium, a gift to Walter O’Malley and the Dodger organization from Sotaro Suzuki, prominent sportswriter in Japan and a future member of the Japanese Baseball Hall of Fame. The seven-foot stone lantern, which arrived in six cases, became the centerpiece of the Japanese garden that existed beyond the Union 76 station in center field at Dodger Stadium.

Fresco Thompson, Walter O’Malley’s hire for Dodger Vice President in Brooklyn, who was serving as the club’s General Manager in Los Angeles in mid-1968, dies at the age of 65.