In an historic announcement in Montreal, Dodger President Branch Rickey informs the press that the Dodgers have signed African-American star Jackie Robinson to the Montreal Royals, their top farm team in the International League. At that time, Rickey, Walter O’Malley (whose title was Dodger Secretary), John L. Smith (Dodger Vice President) and Dearie McKeever Mulvey (daughter of late club president Stephen W. McKeever) all owned 25 percent of the shares of Dodger stock. Earlier in the year, Robinson had batted .340 for the Negro League Kansas City Monarchs.

The Brooklyn Dodgers announce the signing of Jackie Robinson to a contract with the Montreal Royals, the Dodgers’ AAA franchise. Robinson, the first African American to player Major League Baseball, would make his major league debut April 15, 1947 and his remarkable career would lead him to a first ballot election to the National Baseball Hall of Fame. 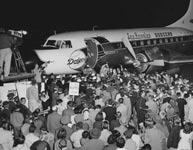 Thousands of spectators, invited dignitaries, 200 newsmen and two bands were among those to greet the “Los Angeles Dodgers” to their new home at a welcoming celebration at Los Angeles International Airport. As Walter O’Malley stepped off the plane, an uninvited gentleman served him a summons which challenges the city’s approved contract with the Dodgers. Los Angeles City Councilwoman Rosalind Wyman and L.A. County Supervisor Kenneth Hahn, who were both vitally instrumental in bringing the Dodgers to their new home, welcomed O’Malley and the Dodgers at the steps of their team-owned Convair 440 airplane with the words “Los Angeles Dodgers” emblazoned on it. Wyman shouted into a microphone, “Welcome to Los Angeles.”Associated Press, October 24, 1957 In a brief press conference in the airplane, O’Malley said that he would have his staff evaluate both Wrigley Field and the Los Angeles Memorial Coliseum as places to play home games. He also mentioned his radio and TV policies were not yet established in Los Angeles. O’Malley thanked the writers stating, “In my years I have long been exposed to the metropolitan press and frankly, never before have I seen such a fine job of trying to honestly tell in a simple story a most complex operation like the transferring of a major league franchise.”Paul Zimmerman, Los Angeles Times, October 24, 1957

A KTTV (Los Angeles) television crew was at Los Angeles International Airport awaiting the arrival of the Dodgers to the City of Los Angeles with Dodger President Walter O’Malley on board. While at the airport waiting for the Dodgers, KTTV enjoyed a minor scoop as they telecast the trail of the satellite shell of Sputnik, the first satellite launched into space. The satellite’s appearance over Los Angeles skies was then broadcast to the home audience.Los Angeles Times, October 24, 1957

Reader Ted Berkelmann of New York City writes a letter to The Sporting News to voice his opinion of Walter O’Malley and the Los Angeles Dodgers for winning the 1965 National League Pennant and World Series title. “Walter O’Malley may never have a statue erected for him in Brooklyn, which is understandable,” wrote Berkelmann. “But if there is one thing he must be given credit for, it’s his refusal to unload Walter Alston following a poor season. In spite of outside suggestions that he sign a ‘more aggressive type’ pilot, he has kept Alston at the helm for a longer time than any other manager now in the majors. The Dodger pennant this year is a vindication of O’Malley’s departure from the policy that makes a manager the scapegoat for a losing season.”The Sporting News, October 23, 1965

Dodger Stadium is the site for the Trailer Coach Association Annual Mobile Home Show, which runs through October 30. Because of the size of the parking area, Dodger Stadium will enable each manufacturer to exhibit all models and ensure the public to view the most complete display of mobile homes and travel trailers ever held west of the Mississippi and, perhaps, the largest ever held anywhere, according to Association President Gene DiSano.Western Mobile Home News, May 30, 1966