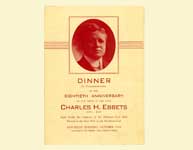 In commemoration of the 80th Anniversary of the birth of the late Charles H. Ebbets, a dinner is held in the “Coal-Hole” of the Brooklyn Club. Baseball fan and attorney Walter O’Malley, 36, is in attendance for the festivities. According to the wishes of former Dodger owner Ebbets, who passed away in 1925, he left a sum of $5,000 to provide an annual dinner for his friends on his birthday.The New York Times, October 29, 1939

Harry R. C. Hickey writes a letter of thanks to Walter O’Malley: “I want to tell you how grateful I am for the confidence you have in me in sponsoring my election as a Director of the Dodgers. It is, indeed, an honor I shall always remember. With assurances of my friendship, high esteem and very best congratulations and good wishes for your good health and success as ‘skipper’ of the ‘Dodgers,’ I am Sincerely, Harry.” Hickey also served as Vice President of the Fidelity and Deposit Insurance Company of Maryland upon his election as a Dodger Director on October 26. In 1952, Hickey, who had received his law degree from the University of Maryland in 1909, was elected as Treasurer of the Dodgers.

In acknowledgment of a photo album put together by official Dodger photographer Barney Stein, Walter O’Malley writes, “Dear Barney: The album of the pictures was really most welcome and a fine souvenir of our first World’s Championship. I know everybody who sees the book is thrilled.” 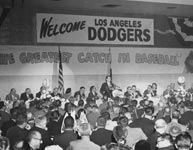 More than 1,100 civic leaders, dignitaries and area businesses support the “Welcome Dodgers” luncheon at the Statler Hotel in Los Angeles. Walter O’Malley stands in front of a large banner behind the dais which read, “Welcome Los Angeles Dodgers, The Greatest Catch In Baseball.” Comedian Joe E. Brown served as the master of ceremonies and famed umpire “Beans” Reardon got the festivities started when he hollered, “Play Ball.” O’Malley told the audience after receiving a standing ovation, “The next time you will be asked to stand will be when your own Duke Snider hits the first home run for your Dodgers here...There will never be an occasion when mothers and fathers will have the right to ask any of our officials, players or anyone else in the Dodger organization to apologize for their conduct.”Paul Zimmerman, Los Angeles Times, October 29, 1957

Murray Robinson of the New York Journal-American interviews Walter O’Malley on various subjects in an article reprinted in The Sporting News. Robinson asked O’Malley, “Do you feel you did right in moving the Dodgers?” O’Malley replied, “I waited ten years for ‘them’ to let me build a $12,000,000 ball park with my own money at Flatbush and Atlantic, and they turned me down. Of course I was right in moving. The defense rests with pictures of those three crowds of 90,000-plus each at the World’s Series in the Coliseum.” Robinson then queried, “Do you miss Brooklyn?” O’Malley answered, “I do. Dropping in to see the boys, and so on. And I think Brooklyn misses us, too. I’m not mad at the Brooklyn fans and I don’t think they’re mad at me. They understand. They’ve written me many letters and no one has ever criticized our moving. Brooklyn fans always supported the Dodgers. I love them. But the Dodger players are already falling hard for this California livin’. Swimming pools, yet.” Robinson asked about the difference of Brooklyn fans and Los Angeles fans. O’Malley said, “Brooklyn fans are born. Los Angeles fans are made. Both are free with the advice. We have more family groups in L.A. than we had in Brooklyn — parents and kids. Strangely enough, our problem in Brooklyn was getting the youngsters interested.”Murray Robinson, The Sporting News, October 28, 1959 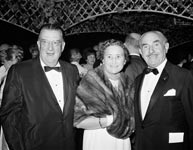 The Los Angeles Dodgers defeat the New York Yankees at Yankee Stadium, 9-2 to win the 1981 World Series in six games. Ron Cey, Pedro Guerrero, and Steve Yeager set a World Series record when they are named Tri-Most Valuable Players for the Series. The World Championship is the fifth overall and fourth for the Dodgers in Los Angeles.