Arch Murray writes a full page feature of Walter O’Malley in The Sporting News. Murray asked O’Malley how he manages to fit everything he does into one day. “I don’t take vacations,” said O’Malley. “As I mentioned before, I don’t waste too much time sleeping. I don’t have any real hobbies. I don’t care about music or things like that but I love to work. I never was able to sit down and do nothing. The last vacation I had was in 1948 when the Dodgers trained in Ciudad Trujillo (now Santo Domingo, Dominican Republic). I spent a week down there and didn’t do anything but watch them practice and loaf in the sun. I go to training camp at Vero Beach every spring but only for a couple of days. I’ll probably be there more next spring, though, because it will come under the heading of work then.”Arch Murray, The Sporting News, November 8, 1950

Harold (Chad) McClellan speaks admiringly of Walter O’Malley and his efforts to bring the Dodgers to Los Angeles on KNXT-TV. McClellan was the lead negotiator for the city of Los Angeles in their contract with the Dodgers. “The financial risks shouldered by Mr. O’Malley of approximately $15,000,000 represent the greatest single private capital risk ever taken by the owner of an American major sports franchise. Even though O’Malley is underwriting all expenses incurred in the developments necessary in Chavez Ravine, delays already have cost the Dodger president $2,500,000 as a result of the activity of obstructionists to the contract.”Bob Hunter, The Sporting News, November 18, 1959 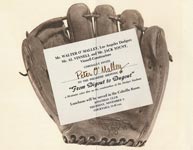 The premiere showing of “From Digout to Dugout,” a 26-minute color film on the construction of Dodger Stadium is held at the Cabrillo Room of the Jonathan Club in downtown Los Angeles. Walter O’Malley, along with Al Vinnell and Jack Yount of Vinnell Constructors, host the luncheon and screening. The film captures the evolution of the initial leveling and grading process for the stadium, through to the construction using an on-site crane that was used specifically and exclusively for the Dodger Stadium job. Groundbreaking ceremonies were held on September 17, 1959 and Dodger Stadium opened to rave reviews on April 10, 1962. 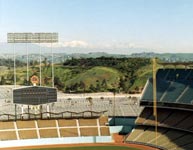 Walter O’Malley sends a letter to landscape designer John T. Ratekin in Los Angeles informing him the Dodgers would like to retain him as a consultant for the balance of 1962 and through 1964 to develop plans to beautify the grounds of Dodger Stadium. A formal agreement is to be sent upon acceptance. “The Dodgers are about to award contracts with established landscaping contractors which will provide for a heavy concentration of planting for the balance of 1962, with a follow-up program in 1963,” O’Malley writes. “The bulk of the plantings themselves will be done during this period, but in 1964 we will want to take a new look at the results to satisfy ourselves if any revisions are indicated.”

John D. Bellinger, President of First Hawaiian Bank in Honolulu, sends this note to Walter O’Malley: “Congratulations on your hole-in-one!”