A lengthy feature article about Walter O’Malley and his family runs in the Long Island Sunday Press. O’Malley had recently been named President of the Brooklyn Dodgers and the story introduces the Amityville, L.I. resident to its readers. While attending night classes at Fordham Law School in Manhattan, O’Malley’s days were full working with a geological survey making test borings under the East River near the sites of the Queens-Midtown Tunnel and the Tri-Borough Bridge. He earned his law degree, passed the bar exam and began his career. The article states, “O’Malley devoted both his days and nights to the law. Baseball was very unimportant in his life.” According to O’Malley, his wife Kay is a great fan of the Dodgers. “My wife and kids are better ball fans than I am,” he said. “They seldom miss a game. My wife keeps score in an official National League scorebook; my daughter has individual pictures of Dodger stars on her wall, and my son has his own Dodger uniform. Kay was a Dodger fan...and a rabid one, years before I ever set foot in Ebbets Field. I used to root for the Bushwicks, and regularly spend Sunday afternoons with the boys at Dexter Park.”Herman Obermayer, Long Island Sunday Press, November 19, 1950 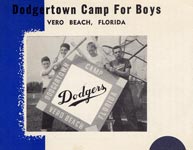 Walter O’Malley writes to Dodger Director Bud Holman in Vero Beach, Florida about a new baseball camp to be held at Dodgertown in 1954. “I am mailing you under separate cover few copies of a booklet on the camp we will run this spring prior to our normal opening. This is an interesting experiment and we hope it will bring 300 adult amateur baseball leaders from all parts of the country to Vero Beach.” O’Malley named the ballpark at Dodgertown “Holman Stadium” upon its opening earlier that year on March 11. Influential business leader Holman was the person most responsible for attracting the Dodgers to Vero Beach, after approaching then Dodger President Branch Rickey. The Dodgers began spring training activities in Vero Beach in 1948 on what was the site of a former U.S. Naval Air Base during World War II.

Responding to newspaper reports that the Dodgers and Cincinnati Reds were headed to Los Angeles and San Francisco, respectively, Walter O’Malley said there are no present plans to move or sell the Dodgers. “What the future holds, I don’t know,” O’Malley said, fresh off a tour of the Caribbean winter leagues. “But there is no league discussion scheduled to discuss moving the club and I have no present plans to move or sell. Somebody has been trying to buy the club every month since I can remember.” According to Associated Press, “The Brooklyn president agreed that at one-time he had explored the possibilities of moving to the Pacific Coast. ‘That was some time ago,’ he said. The reference apparently was to some period prior to an offer last year by Ed Pauley, a California millionaire, to bring the team to Los Angeles. ‘At the time I was interested only in the extreme future,’ O’Malley said.”Los Angeles Times, November 20, 1954 O’Malley summed up the current Ebbets Field situation by stating, “What the future holds for us I just wouldn’t know. We are confronting two serious problems. One is at the turnstiles (where attendance in 1954 had dropped to just over one million, the lowest of the post-war era). The other, which you might say dovetails with the first, has to do with the parking situation at Ebbets Field (where only 700 cars could be parked in various adjacent lots). We are giving a great deal of thought to both.”John Drebinger, The New York Times, November 20, 1954

According to John Drebinger of The New York Times, the Dodgers are considering playing selected Spring Training exhibition games in Los Angeles in 1956. Because Miami Stadium (where the Dodgers play a majority of their exhibition home games) might be converted into a huge jai alai stadium, spring baseball might have to be moved to another location. O’Malley said that the Dodgers would still maintain Dodgertown in Vero Beach as their primary training headquarters.John Drebinger, The New York Times, November 20, 1954

Walter O’Malley provides transportation for R. Buckminster Fuller as he and the inventor-designer travel to Princeton University’s School of Architecture for the weekend to review possible dome stadium designs for a new Dodger ballpark in Brooklyn.

Walter O’Malley tells The Sporting News how pleased he was to get a copy of the newspaper while on vacation in Tanganyika, Africa. “It was the darnedest experience to get The Sporting News (thanks to you) on safari, where even my creditors can’t find me.”The Sporting News, November 19, 1958

Joseph M. Quinn, Deputy Mayor of Los Angeles writes a letter to P. J. McGovern, President and Chairman of Little League Baseball in Williamsport, Pennsylvania. “Thank you for your November 17 letter. Mayor (Sam) Yorty and Walter O’Malley are very greatly interested in the possibility of building a Little League Baseball Stadium in Los Angeles. Mr. William Frederickson, General Manager of our Department of Recreation and Parks, has written you for some information that will help us study the possibilities. After Mr. Frederickson has an opportunity to study the criteria and possible sites, I think a meeting would be profitable.”