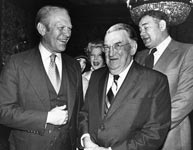 Former San Francisco Mayor George Christopher writes a letter to Peter O’Malley, Walter’s son, regarding a gift that was presented to him by former Los Angeles County Supervisor Warren Dorn. “During a banquet sponsored by the Axios Society of Los Angeles in my honor, our mutual friend Warren Dorn presented me with a Dodger uniform in your behalf, and this is to thank you for your generosity,” writes Christopher. “I might add here that I have fond remembrances of your great father, and recall vividly the many hours I spent with him and Horace Stoneham, during the days we were negotiating a transfer of the Dodgers and Giants to the West Coast. I have repeatedly stated in public that your father was one of the finest gentleman I had ever met during my Mayoralty. Thanks again for the Dodger uniform, and if I ever get reckless enough, I’ll wear it at a Giant game in San Francisco.”