Bob Curzon writing in the Vero Beach Press-Journal about new Dodger President Walter O’Malley: “O’Malley doesn’t give you the impression when you are with him that he is as big a man (in the business sense), that he really is. In the past eight years, he has stepped into positions held by two very famous men. In 1942, he replaced the late Wendell Willkie as legal representative for the Brooklyn Dodgers and in 1950 he steps into the role of president of the Dodgers recently vacated by Branch Rickey, one of the most colorful men in baseball. In addition to being head of the Dodgers, O’Malley owns New York Subways Advertising Co., of which he is president. He owns a large share of the J. P. Duffy Co., maker of building materials; he owns 25% of the Ebbets-McKeever Exhibition Co., is a stockholder and director of Brooklyn Gas Co., and has been director and attorney for the Trommer Breweries. He also figured in many war-time companies during the last war...O’Malley really came into the Dodger picture predominantly in 1944, although he had assisted, through counsel, on the financial side as far back as 1933. In 1944, O’Malley and the late John L. Smith, the penicillin king, purchased 25% of the Dodger stock. In 1945, the trio purchased an additional 50% and re-organized the club, electing Rickey as president, O’Malley, vice-president and secretary, and Smith, vice-president and treasurer. When Rickey decided to sell his stock this year O’Malley and Mrs. John L. Smith purchased the Rickey stock and set up O’Malley as president.”Bob Curzon, Vero Beach Press-Journal, November 24, 1950 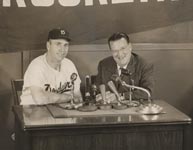 Walter Emmons Alston was hired as Dodger manager, to which newspaper headlines responded, “Walter Who?”, because he had no previous experience at the major league level. Alston, 41, signed a one-year contract with the Dodgers, something his predecessor Charlie Dressen was unwilling to do, demanding a three-year deal. Dodger President Walter O’Malley said, “It always will be a one-year contract, but I hope it will be renewed for many years to come.”John Drebinger, The New York Times, November 25, 1953 Indeed, Alston would work for 23 seasons for O’Malley, all on one-year agreements, and wound up winning four World Championships and was elected as a member of the National Baseball Hall of Fame in 1983. Alston had enjoyed managerial success in the Dodger minor league system, guiding the Montreal Royals to the Little World Series championship in 1953 against the New York Yankees’ affiliate in Kansas City. A native of Darrtown, Ohio who resided in Oxford, played in one major league game for the St. Louis Cardinals on September 27, 1936 and struck out in his only at-bat off Chicago’s Lou Warneke. Alston also revealed he had only seen Ebbets Field once prior to becoming skipper of the Dodgers, though he was in the organization for 10 years. Alston said he thought about writing the Brooklyn office or calling about the job, but didn’t. “But then I figured that if they didn’t know all about me after ten years, writing or calling wouldn’t help. So I just waited.”Michael Gaven, New York Journal-American, November 24, 1953

One year after hiring Walter Alston as manager of the Brooklyn Dodgers, Walter O’Malley discusses his decision with the sportswriters when the Dodgers finish second in the National League with a 92-62 record. “We feel Alston did all right last season,” said O’Malley. “We in no way can blame him for the operation on (catcher Roy) Campanella’s hand or the appendectomy on (pitcher) Johnny Podres. We are announcing his agreement to terms at this time because of certain organizational changes in the future.” Asked if he thought he would return as Dodger manager for 1955, Alston said, “Yes, I expected to.”Dave Anderson, Brooklyn Eagle, November 24, 1954 O’Malley also reiterates that he is interested in building a new stadium in Brooklyn. “We want our own land and we want exclusive operation of the ball park,” said O’Malley. The Brooklyn Eagle reports “The only civic help desired by the Dodgers is co-operation in securing land to erect the park.”Brooklyn Eagle, November 24, 1954