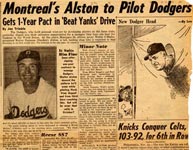 The day after Walter O’Malley hires Walter Alston to manage the Dodgers for the 1954 season, a note runs in this week’s The Sporting News. Walter O’Malley met with the New York media after returning from Vero Beach, Florida and everyone wanted to know if he had selected a manager for the 1954 season. O’Malley didn’t quite give the writers the answers they wanted. O’Malley began by saying, “We had a very nice time. We caught about 40 fish, some of ’em around four pounds (in the Dodgertown lake). The plant is in good shape and the pitch-and-putt golf course around the lake is now in very good condition. You’ll like it.” The reporters kept prodding, “What about a manager. You haven’t got one — or did you know?”Roscoe McGowen, The Sporting News, November 25, 1953 At that point, O’Malley started discussing his son Peter’s recent success in a football game while playing for La Salle Military Academy and that spelled the end of the press briefing.

Walter O’Malley writes to Jackson F. Long of United Air Lines in Los Angeles. “Many thanks again for the fine outing at Lakeside (Country Club) and now for the picture. My only regret is that we do not have a picture of my straightening out Arnold (Palmer) on the first tee when he dubbed the drive.”