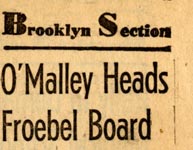 The Brooklyn Eagle notes this about Dodger part-owner Walter O’Malley being named president of the board of trustees for Froebel Academy in Brooklyn earlier in the week: “Established in 1877, the academy is considered the first elementary school in the country to be run by parents and teachers in co-operation. Mr. O’Malley adds the new office to many other activities. Froebel Academy is fortunate.”Brooklyn Eagle, November 28, 1948 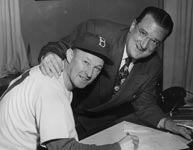 Walter O’Malley fulfills his promise to 52-year-old Chuck Dressen and names him manager of the Dodgers, succeeding Burt Shotton, who won two National League Pennants in three full seasons. It is the first manager hired by new Dodger President O’Malley, who had tried to stop Dressen from leaving the Dodgers for the New York Yankees in 1946, but when unable to do so, he vowed that he would bring him back when he could. After two seasons as a coach for the Yankees, Dressen became manager in Oakland in the Pacific Coast League, before rejoining the Dodgers. Previously, Dressen coached for seven seasons with the Dodgers. Dressen signs a one-year contract at the Dodger offices at 215 Montague Street in Brooklyn. 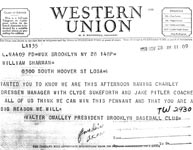 Bill Sharman, who would later make a name for himself as a Hall of Fame player and coach in the National Basketball Association, receives this telegram from Walter O’Malley: “Wanted you to know we are this afternoon naming Charley Dressen Manager with Clyde Sukeforth and Jake Pitler coaches. All of us think we can win this pennant and that you are a big reason we will.” Despite the glowing reports about his baseball ability and athleticism, Sharman never did play in a major league game for the Dodgers. Sharman is one of only three individuals to be enshrined in the Naismith Memorial Basketball Hall of Fame in Springfield, Massachusetts as both a player and a coach. The others are John Wooden and Lenny Wilkens. 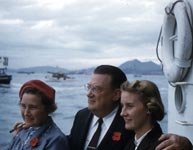 Walter O’Malley and his family arrive in New York on the Cunard Liner “Queen Mary,” following the 1956 Goodwill Tour to Japan and subsequent travels in Europe. The “Queen Mary” was one of the world’s largest and fastest liners at 81,237 gross tons, 1,020 feet overall length and 12 decks.

David W. Hearst, a twin son of publishing magnate William Randolph Hearst, sends a thank you note to Walter O’Malley. David’s older brother John Randolph Hearst died unexpectedly at the age of 49 in St. Thomas, Virgin Islands. “Dear Walter: Thank you very much for your kind expression of sympathy. It is deeply appreciated by myself and all the family. Sincerely, David” John Randolph Hearst was a native New Yorker and served as President of Harper’s Bazaar — Cosmopolitan Book Publishing as well as General Manager for Hearst radio operations. From 1932-34, he was publisher of the New York Daily Mirror.

Yomiuri Giants owner Matsutaro Shoriki, the founder of professional baseball in Japan, responds by letter to Walter O’Malley. “I wish to express to you our heartfelt thanks and gratitude for your kind letter, congratulating me on my recent decoration by the Japanese Government with Grand Cordon of the Order of the Rising Sun, First Class. We are confident that the year 1965 will bring an expansion of our already most pleasant relationships. Once again, thanking you for your thoughtfulness, and with all sincere wishes for your continued health and prosperity.”