The Brooklyn-New York football team, supported by the Dodgers and the New York Yankees, in the All-America Football Conference is on the brink of losing the funding from the Dodgers. “No official announcement will be made until the Yankee owners (Del Webb and Dan Topping) meet with (Dodger President) Branch Rickey, John L. Smith and Walter F. O’Malley to get the bad news in writing, but the Dodger directors are resolved not to throw away any more money on football. Smith and O’Malley were against mixing the two sports from the start but went along with Rickey when the conference sold the later a bill of goods at the time Bill Cox quit Ebbets Field. Rickey’s main interest was to keep the franchise in Brooklyn as a source of Winter rent. Since the club lost nothing, what could they lose? Only a little matter of $390,000 for operating expenses. Rather than quit cold, which they were ready to do, the Dodger owners entered into the deal with the Yankees...‘Our losses will be substantial,’ said Smith, the only benefactor of the team who was available today. ‘I couldn’t even guess the figure until we have our meeting. Neither can I officially say that our deal will not be renewed, but if it’s a case of speak for yourself John, I am through with football...We didn’t even hope to break even but we were hopeful that we could save football for our Brooklyn people that like the game without too great a cost. But when it cost us close to $400,000 in one year, I think even the most rabid football fan in Brooklyn agreed with us that it was time to quit. Then the Yankees proposition came along and I was only too willing to join with Dan Topping and Del Webb. We were all in the same boat and maybe we could help each other...I cannot speak for Topping and Webb or even Rickey and O’Malley, but I cannot see us continuing our deal beyond the present season.’”Michael Gaven, New York Journal-American, November 30, 1949

Walter O’Malley tries to assist Dodger star catcher Roy Campanella. O’Malley writes to Adrian Mason at the Democratic Headquarters in Patchogue, New York: “Dear Adrian: Roy Campanella is in the hospital (hand surgery) and when I visited him he said the only thing (that) would make him happy is to get the license number RC-39, RC being for Roy Campanella and the 39, his uniform number. Will you be good enough to look into the matter and let me know if this is something that can be worked out.”

Bernard M. Bloom, Chairman of the Brooklyn Law School, sends a letter to Walter O’Malley acknowledging his donation for the Henry L. Ughetta Memorial Library. “When we learn the date of completion of the new Law School Building, which we anticipate will be in September of 1968, we will extend an invitation to you to attend the dedication ceremonies,” writes Bloom. Judge Ughetta of Brooklyn’s Appellate Division also served for more than a decade on the Dodger Board of Directors. 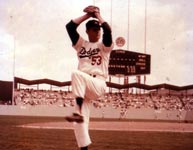 Cy Young Award-winning pitcher Don Drysdale was asked how he felt about Walter O’Malley’s decision to move home plate 10 feet closer toward center field at Dodger Stadium for the 1969 season. Drysdale was ready with his response. “It’s okay with us pitchers if they move the plate out,” said Drysdale, “just so they don’t move the mound.”The Sporting News, November 30, 1968