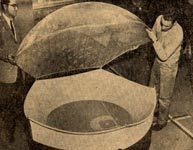 While at Princeton University’s School of Architecture to examine preliminary studies for a dome stadium for the Dodgers, Walter O’Malley discusses his findings with the press. O’Malley was impressed with the work of the graduate architectural students, under the tutelage of visiting professor and inventor R. Buckminster Fuller. “I am delighted at the work that has been done,” said O’Malley. “I believe a substantial contribution to the stadium concept has been made. The type of dome Mr. Fuller proposes seems to be quite practical and economical.”The New York Times, November 23, 1955 The 30-story high stadium could be used for year-round sports and other attractions and was to have a translucent dome, some 750 feet in diameter. The dome would be supported by a lightweight aluminum truss structure, 300 feet above the pitcher’s mound. With no obstructing posts, every seat would be a good one. “A dome of translucent material would eliminate shadows and give a pleasant interior effect of the sort one finds in a greenhouse,” said O’Malley, who spent about an hour each morning in his family greenhouse raising exotic orchids.New York Daily Mirror, November 23, 1955 Photographs of the four-foot model of the dome stadium appear in many New York papers. Reports that O’Malley directed Fuller to immediately begin engineering calculations on the dome at Fuller’s Synergetics, Inc. laboratories in Raleigh, North Carolina and Cambridge, Massachusetts were incorrect. O’Malley had always stated that Capt. Emil Praeger was his designer; meaning that, if accepted, Fuller’s concept would be handled at Praeger’s direction on the stadium project. 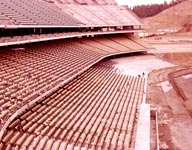 The installation of some 47,964 seats begins at Dodger Stadium, as Walter O’Malley looks on. It is one of the largest single stadium installations in history, according to the American Seating Company of Grand Rapids, Michigan which handled the huge project. The colors for the designated stadium levels include sky blue, sea green, coral and orange. The color scheme for the Dugout Box seat level was still to be determined. With the seating in the Left and Right Field Pavilions to be added, the capacity of Dodger Stadium totaled 56,000. The seats, which arrived in Los Angeles via Southern Pacific Railroad cars, are among the widest and most modern stadium seats ever supplied, company officials said. They range in width from 19 to 22 inches, rather than the usual 17 to 18 inches. Backs and seats are of steam bent hardwood with standards of cast gray iron. According to the American Seating press release, “Two innovations in the seating were developed at the request of Walter O’Malley, Los Angeles Dodger president. The seats have been supplied in colors to match the colors of the Stadium. Tickets, too, will be color-keyed so that spectators will be able to find their seating location and their parking areas more easily. The seats required 350,000 feet of board lumber, 546 tons of cast iron and 3 tons of aluminum nuts and bolts.”

In his personal appointment book, Walter O’Malley writes the following, “Pres Kennedy Shot” on this day. On January 17, 1952, O’Malley had been presented with a watch from John F. Kennedy at a Cathedral Club dinner in Brooklyn held in O’Malley’s honor. As a young politician, Kennedy made a speech at that dinner.