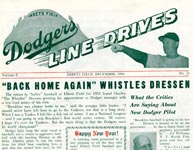 The December, 1950 issue of the official Dodger publication Line Drives is filled with articles about Manager Charlie Dressen, who new Dodger President Walter O’Malley hired to rejoin to the Dodgers, following Dressen’s coaching stint with the New York Yankees. Dressen will manage the Dodgers in 1951, taking over for Burt Shotton.

A letter by Walter O’Malley to Joe Williams of the New York World-Telegram states, “I have your letter of the 28th, and I am leaving to fly to Phoenix but have asked Allied Maintenance Company to check on Walter Grego to see if we need another greensward manicurist. Our Ebbets Field grass is pretty good. There is every reason to believe that it would have been more appealing however, if some of the balls in the seventh game of the (World) Series had bounced off the turf instead of reposing in a Yankee glove.” The Dodgers lost the 1952 World Series to the New York Yankees in that seventh and deciding game, 4-2.

Walter C. Peterson, City Clerk for the City of Los Angeles, announces enough valid signatures on petitions have been collected to put the city’s contract with the Dodgers on a referendum challenging its validity on June 3, 1958.

Vinnell, a magazine for employees, customers and friends, features the construction of Dodger Stadium in its Winter 1961 issue complete with aerial photographs of the on-going progress. “Vinnell Steel, which fabricated the girders and other steelwork for the stadium and put it in place, also erected the pre-cast reinforced concrete stadium parts — some 23,000 units including joists, planking, seat foundations, etc.” Vinnell’s big crane (erected on site and used only for this job) has a 180 foot boom which weighs 25 tons and will lift a weight of 50 tons.

The Vernon Alcoan newsletter, produced by Aluminum Company of America in Los Angeles, informs its readers that 6,000 pounds of aluminum has been used in the seating installation at new Dodger Stadium. Each seat uses 10 Alcoa nuts and bolts in its construction. This adds up to approximately three tons of aluminum nuts and bolts. Placed side by side, the seats would form a continuous row over 32 miles long (from Los Angeles to Pomona).

The Dodgers agree to rent Dodger Stadium to MPO TV of California to film a “Sta-Flo Starch” commercial whereby the company will “cover the playing field with 3,000 pieces of laundry.” It was agreed that the laundry and clean-up would be completed on December 3.