Attending Baseball Meetings at the famous Broadmoor Hotel in Colorado Springs, Colorado, Walter O’Malley sends a postcard to his wife Kay and their children Terry and Peter. “Absolutely wonderful! One of the N.Y. writers said — ‘This would be quite a view if it wasn’t for the mountains.’ Breathtaking — weather great — mountains snow covered. I miss you all. (signed) Walter.” 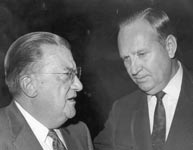 Baseball expansion is approved as Walter O’Malley assisted the efforts of famed singing cowboy Gene Autry, Robert O. Reynolds, Paul A. O’Bryan and associates to bring a new club, the Los Angeles Angels, into the American League. Initially, Autry attended the American League expansion meetings in St. Louis seeking radio rights for his Golden West Broadcasting, but he returned as owner of the Angels. After playing their first year in 1961 at Wrigley Field in Los Angeles, the Angels shared Dodger Stadium with the Dodgers for their respective home games in 1962-65. Wrigley Field had been transferred to the city of Los Angeles by the Dodgers in 1957 as part of the agreement between the parties. 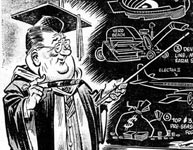 A large cartoon of Walter O’Malley graces the cover of The Sporting News. Renowned cartoonist Karl Hubenthal chooses to depict O’Malley as a college professor, complete with cap and gown, pointing to a blackboard and teaching other executives how to operate a successful sports organization.

The Sporting News editorial lauds Walter O’Malley in his role as president of the Dodgers. “Like most men in high places, be it politics, business, or sports, Walter O’Malley of the Dodgers is a controversial figure. No one is neutral on the Subject of ‘The O’Malley.’...Walter O’Malley is a man who stands on his own two feet, who does not have his hand out for gratuities, who lets everyone know where he stands on any issue...In California, he is using his own organization’s money. He has given the West Coast fine baseball. Whatever else is said of Walter O’Malley, it cannot be emphasized too much that he pays for what he receives, asks no favor, and with Dodger funds, has built a powerful organization. Other franchises, constantly crying for city, state or other help, would do well to follow the lead of The O’Malley.”The Sporting News, December 6, 1961

Kay and Walter O’Malley attend the Grand Opening of the Dorothy Chandler Pavilion at The Music Center in Los Angeles. The first performance includes Maestro Zubin Mehta conducting the Los Angeles Philharmonic orchestra with jazz soloist Jascha Heifetz. The Pavilion would be named the Dorothy Chandler Pavilion because of the efforts of the Southern Californian businesswoman and philanthropist to build the performing arts theatre. 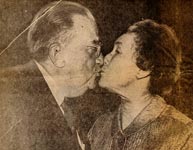 Kay O’Malley, wife of Dodger Chairman of the Board, is honored as one of 10 Times Women of the Year in 1971 by the Los Angeles Times in a ceremony at The Times Building attended by more than 500 civic leaders, former Women of the Year, friends and relatives of the recipients. The next day’s Los Angeles Times shows a large photograph of Walter O’Malley giving Kay a congratulatory kiss. As an honoree, Kay receives an engraved silver cup for her outstanding achievement and volunteerism. She described her life as “my church, my family, my friends and baseball...and they have all been good to me.”Los Angeles Times, December 7, 1971