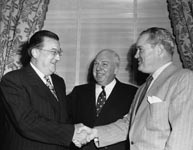 At the Major League Baseball meeting in New York City, Walter O’Malley is officially elected as a National League member of Baseball’s Executive Council. From October 8, 1951 until this election, O’Malley served out the term of Ford C. Frick, who was named Commissioner of Baseball. O’Malley would serve on the important baseball decision-making body for 28 years, the longest tenure in history.

The Dodgers announce that Pennsylvanian-based scout Tom Lasorda has been assigned to scout the Southern California area for players and he would relocate to Southern California. On September 29, 1976, Lasorda was named manager of the Dodgers succeeding Walter Alston who led the Dodgers to four World Series Championships (1955, 1959, 1963 and 1965).

Detroit Free Press Sports Editor Joe Falls and baseball writer George Cantor quiz Walter O’Malley on a number of baseball subjects, including upcoming divisional play in baseball, in a question-and-answer story. “Originally, I was very opposed to divisional play,” said O’Malley. “I was also opposed to further expansion at this time. I don’t think we had a chance to absorb the last expansion. I don’t think those clubs had enough of a chance to move up and become competitive, and now we are adding even more teams and this can only dilute the quality of play. Inevitably, we’ve had to go along with these changes and maybe it’s my Irish nature but I’ve had my boys do some pencil pushing and now I think I’m going to like this divisional play. I’m a stand-patter but I think the fans are going to like it because their team will now be in the race almost all the way, whereas if you weren’t up at the top around the Fourth of July, the season was over for you.” In regards to interleague play, O’Malley said, “I’m against anything that dilutes the importance of the World Series and interleague play would do just that.” In regards to future expansion, O’Malley said, “I’m inclined to think we’re on the expansion kick and there probably will be more expansion. I would prefer to have it delayed eight or 10 years, and at that time I would like to see two cities in Japan added to the major leagues. Today there are two teams in Japan which would be great additions to the majors — the Tokyo Giants and the Hanshin Tigers in Osaka. I assure you they would not be second-division teams in our leagues.”Joe Falls, Detroit Free Press, December 8, 1968