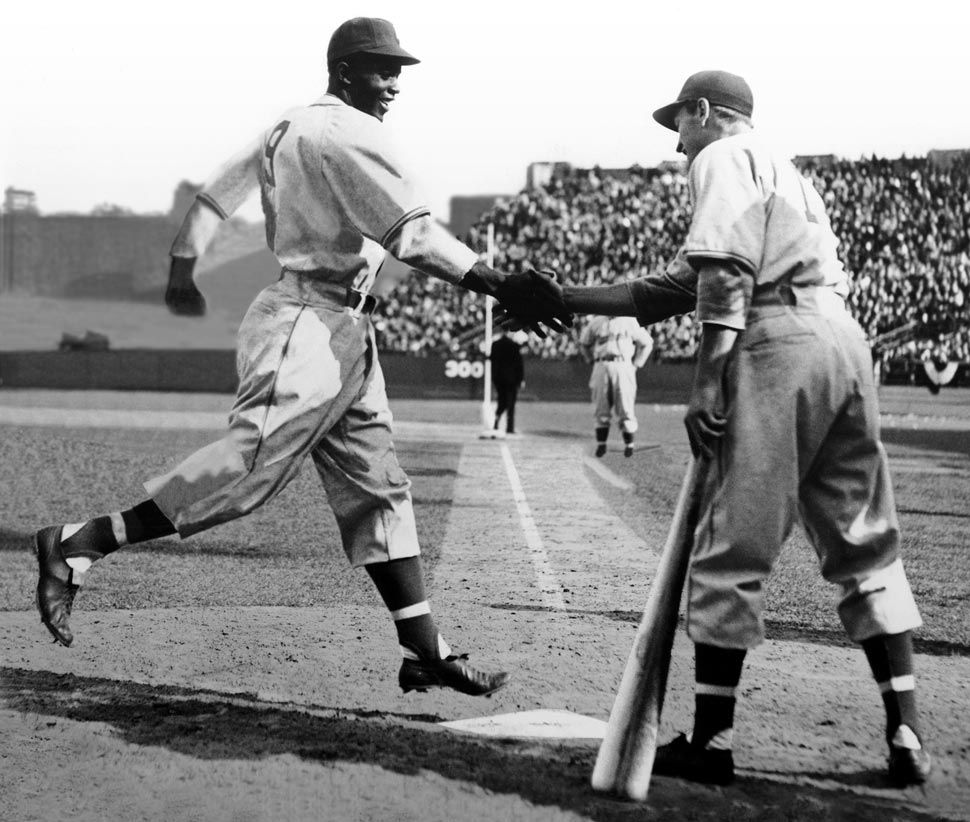 Legacy of the Handshake Remembered

While April 15, 1947 is the critical date when Jackie Robinson debuted for the Brooklyn Dodgers at Ebbets Field, becoming the first Black player to participate in Major League Baseball, another date preceded it which should also be remembered for its historic significance. 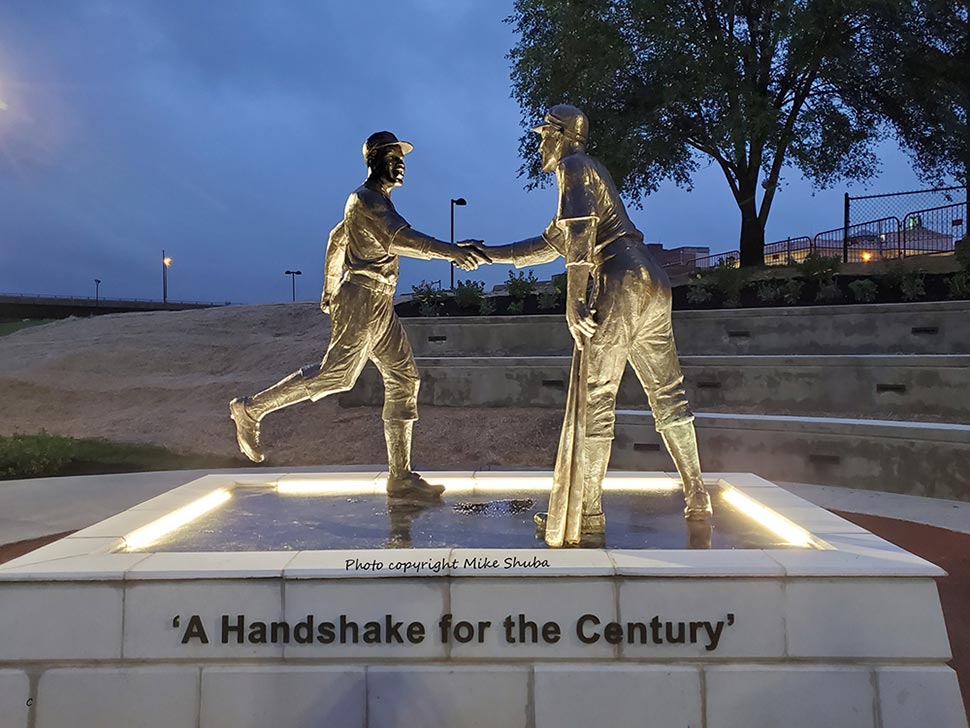 That is April 18, 1946. Dodger President Branch Rickey had signed Robinson to a Dodger minor league contract on October 23, 1945, with the support of his three Dodger partners and equal stockholders Walter O’Malley, John L. Smith and James Mulvey (representing his wife Dearie). In the interim before playing a game for the Dodger organization, Robinson married Rachel Isum on February 10, 1946. They had met at UCLA where they both attended. The Dodgers held 1946 Spring Training at Daytona Beach, Florida, which was under Jim Crow laws prevalent in the South and Robinson endured racial abuse preparing for his first season in the minor leagues. The 27-year-old was assigned No. 9 with the Royals (not the familiar uniform No. 42 which the Dodgers retired in 1972 and the rest of MLB retired in 1997) and he started as a second baseman.

Robinson played his first regular season game for the Montreal Royals, the International League affiliate of the Dodgers and their top farm team out of 21 total, on April 18, 1946. At Roosevelt Stadium in Jersey City, New Jersey, Robinson grounded out in his initial at-bat and heard jeers in the crowd. But, in the third inning he launched a three-run home run over the left field wall against the Jersey City Giants and he rounded third base heading for home plate. There, a smiling Robinson was greeted by George “Shotgun” Shuba, who was batting third in the lineup behind Robinson and had left the on-deck circle to congratulate his teammate. Shuba reached out to shake Robinson’s hand as he crossed home plate. That simple gesture of celebrating with a teammate is commonplace today with high fives, arm bashes, and pats on the back. But, in 1946, that act for a white player to offer to his Black teammate was a historic one and a step towards racial equality. Shuba had seen the indignities that Robinson had faced during Spring Training. Robinson had to stay with Rachel in separate housing. He was not permitted to eat in restaurants with his teammates. Robinson was taunted and threatened wherever he went. Spring games were cancelled because local Florida cities did not want Robinson to play in their ballparks.

A photographer captured the seminal handshake, a moment in time that will live forever, especially now since Shuba’s son Mike worked tirelessly to have a bronze statue of it created. George Shuba was proud of the barrier breaking gesture and displayed a copy of the photo in his living room, the only piece of memorabilia that he had not boxed and stored. Shuba told Mike, “I want you to remember what that photo stands for. You treat all people equally."Chris Lamb, USA Today, April 15, 2021 Shuba and Robinson became friends and would play together with the Dodgers for seven seasons (1948-1950 and 1952-1955), including as teammates for the first Dodger World Championship in 1955.

Considered the first interracial handshake in “Organized Baseball”, which in the modern era included the major leagues and minor league affiliates, Robinson had a glorious debut with the Royals in his 1946 debut, releasing some of the hardship of Spring Training in Florida. He went 4-for-5 with the home run, 4 RBI, 4 runs scored, and 2 stolen bases, leading the visiting Royals to a 14-1 win before an overflow crowd. 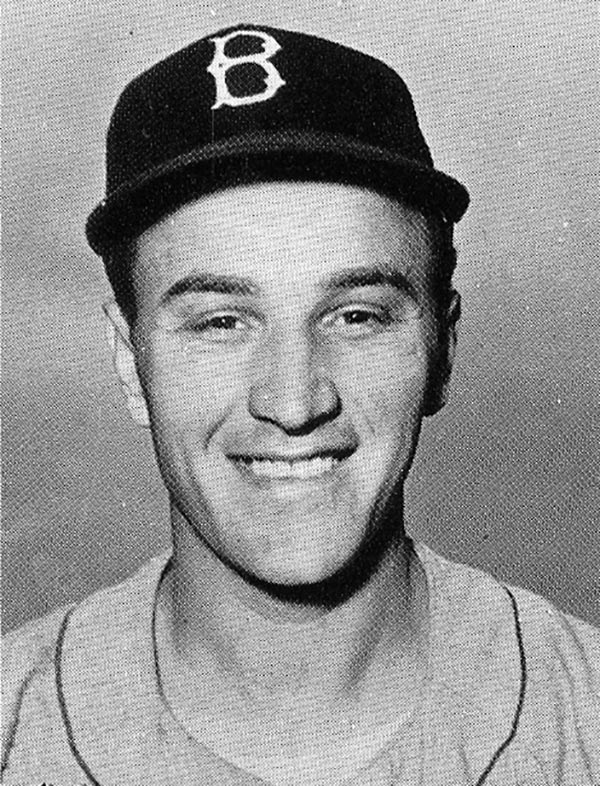 Who was George Shuba and how did he get the nickname “Shotgun”? He was the youngest of 10 children, his parents having immigrated from eastern Czechoslovakia and settling in Youngstown, Ohio. He always had an interest in playing baseball as a youth. Shuba attended Youngstown’s Chaney High School where he was a multi-sport star athlete. Since Chaney High was integrated, Shuba was used to having Black players as teammates and opponents and he treated everyone with respect, just as his father Jan, who worked in the area steel mills, had taught him. In August, 1943, Shuba attended a baseball tryout at Youngstown’s Shady Run Field and was eventually signed by the Dodgers in February, 1944.Vince Guerrieri, “George Shuba” SABR bio project, sabr.org It was a sportswriter in Mobile, Alabama, where the Dodgers had the Mobile Bears Double-A minor league affiliate, who nicknamed Shuba “Shotgun” because George would spray line drives to all fields.

Mike Shuba courageously left his day job as an electrical technician for a large cellular company to keep the flame alive ensuring that the handshake moment would not fade away. Mike traveled with his father around the country and produced posters of the handshake photo, making them available free for schoolchildren, informing them of its significant meaning to American society and race relations. For years, Mike dreamed of having a bronze statue created to commemorate the handshake. At 89 years old, George Shuba passed away on September 29, 2014. Through Mike’s persistence and funding through various donations, he realized his dream on July 17, 2021, when the 7-foot statue by renowned sculptor Marc Mellon was unveiled before hundreds in Wean Park in Youngstown.

Mellon explained the importance of Shuba’s role on CBS Sunday Morning, “This was a harbinger of the civil rights movement to come…There is the dark backstory as to why this is so significant. But, it’s America emerging from the war, from a time of segregation with a realization that we can be better.”September 27, 2020 interview with CBS correspondent Susan Spencer

Mike said about his father at the unveiling ceremonies for the bronze plaque, “He taught me to do the right thing and everything will work out fine. I believe my mother has something to do with this from heaven…she was the rock in our family. It all starts with the parents and I was lucky. Remember that folks, it all starts with the parents. George always said to the kids, “Listen to your parents. They want what’s best for you and they want what’s best for you only.”

George Shuba wrote this on scrap paper which Mike found going through his memorabilia about that April day, “I consider myself the fortunate one for in my lifetime, a lifetime that I consider a very blessed and full life, I have been able to witness two historic occasions. I witnessed first-hand as the on-deck batter Jackie Robinson when he made his professional baseball debut with our Montreal Royals club on April 18th, 1946. To shake his hand after his first hit ever, a home run, was an honor that I will never forget, as that was the day that professional baseball changed forever. And don’t sell his wife Rachel short. Her support during what were some very trying times was nothing short of amazing. Jackie opened the doors not only for other Black athletes but for society as well. To see our country come full circle now in electing a Black man as our leader (President Obama) just validates the impact that Jackie Robinson had upon not only sports but society seven decades earlier.”

The talent-rich Royals won the International League, finishing the season by winning 100 games (100-54). Robinson celebrated with the Royals from the first game in 1946 until the last by winning the Junior World Series championship against the American Association champion Louisville Colonels in six games. But, the real importance of the Royals’ 1946 season should always be remembered with “A Handshake for the Century” on its first day, not its last.