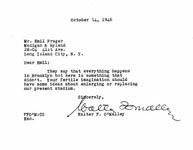 Walter O’Malley sends a letter to noted engineer Capt. Emil Praeger for his ideas about “enlarging or replacing” an aging Ebbets Field, built in 1913, in Brooklyn. Only 700 cars could be parked in the limited lots at Ebbets Field.

Following his third season as Dodger President, Walter O’Malley holds a press conference at 215 Montague Street in Brooklyn to announce, “The Brooklyn Dodgers will have a new manager next year.” While some members of the media felt that O’Malley was there to announce the re-hiring of Charles Dressen, it became clear that there was a vast difference in philosophies. Dressen demanded a three-year contract from O’Malley, while the Dodger boss kept to the longstanding club policy of one-year agreements. In the end, since O’Malley could not get Dressen (or his outspoken wife Ruth, who disagreed with the policy and crafted a strong letter sent by Dressen to O’Malley) to change his stance, the manager was done and the search for a new one commenced. O’Malley commented, “All I can say is that if Charlie signs this contract, he will receive more money than any Dodger player, more than the president of the Dodger corporation and more than any stockholder in the organization. And I don’t think that’s a bad deal.”Associated Press, October 14, 1953 O’Malley even gave Dressen a few more days to reconsider the one-year offer, before starting a search for a new manager.Arthur Daley, The New York Times, October 15, 1953

The Sporting News reports that “Warren Giles, National League president, said Walter O’Malley, head of the Dodgers, wouldn’t even go in the Los Angeles dressing room after the (1959 World Series) victory. ‘Walter didn’t want to take any of the limelight away from the players,’ said the N.L. prexy. ‘He figured it was strictly a team victory.’”The Sporting News, October 14, 1959 An editorial of the same issue states, “So in two short years Los Angeles has achieved what many cities have had only once or twice in a half century of baseball competition — a world championship. The move of Walter O’Malley and his Dodgers to the West Coast was a bitter pill to easterners. Some said it was doomed to failure, but it has been a grand and glorious financial success in the west and it has now been crowned by a well-earned championship. Congratulations to all the Dodgers.”Editorial, The Sporting News, October 14, 1959 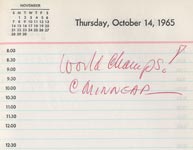 The Dodgers defeat the Minnesota Twins in seven games to win their fourth World Championship (third in Los Angeles) and are the only N.L. club to win four World Series titles in 11 years (1955-65). The Dodgers won Game 7, 2-0, behind World Series MVP Sandy Koufax in Bloomington, Minnesota. Koufax pitched two shutouts in the Series, the second coming on just two days’ rest. Lou Johnson hit a home run that hit the left-field foul pole to put the Dodgers ahead, 1-0, in the fourth inning. A double by Ron Fairly and a single by Wes Parker completed the scoring. Walter O’Malley writes in his personal appointment book, “World Champs! @ Minneap___”

Sandy Koufax shuts out the Minnesota Twins, 2-0 in Minnesota and the Dodgers win the 1965 World Championship. Lou Johnson’s fourth inning home run off the left field foul pole are all the runs Koufax needs to win. Third baseman Jim Gilliam makes a game saving play in the fifth inning to save a run and help stop a Twin rally.

Two little girls wearing Japanese kimonos present a bouquet of flowers to Kay and Walter O’Malley, as well as to Baseball Commissioner William D. Eckert, as they depart from Los Angeles International Airport on the first leg of their goodwill trip to Japan.